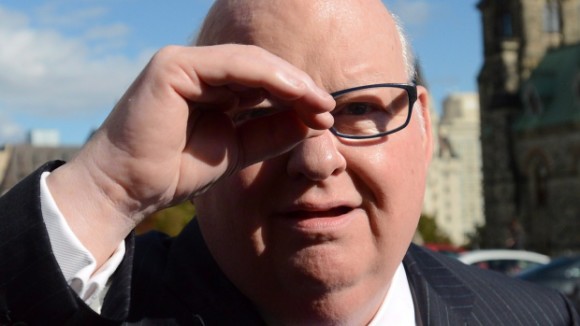 My heart goes out to Mike Duffy.

The Senate expense scandal has taxpayers in an uproar and the honourable senator for P.E.I. facing the prospect of having to repay some $40,000 in living allowance. Worse, there’s talk he could lose his Senate seat, since the Constitution requires senators to reside in the province they represent.

But don’t blame Mike. He’s just following the rules. The fault lies with those weasels from Frank Magazine.

“The story is a smear on me by former Frank employee, Glen McGregor,” Duffy moaned in an email to friendly Tory bloggers last December.

“Why has McGregor (now with the Ottawa Citizen) singled me out? Payback for my successful lawsuit against Frank is my bet.”

They take me back to the good old days, when Mike hosted his own TV show and I edited Frank, the upstart satirical mag.

Mike and I were friends, sort of. We used to hang in the same social circles and frequented many of the same watering holes. We even shared the dubious distinction of being on Chatelaine’s list of Canada’s 10 Sexiest Men for 1991, Mike as “Mr. November,” me as “Mr. February” (the shortest month, shurely?! – ed.)

Mike was great company. Amusing, affable, a life-of-the-party charmer. He was also needy and driven by a desire to be somebody.

Ever since the mid-’60s, when he was a teen disc jockey at CFCY-TV in Charlottetown, Mike dreamed of a career in broadcasting. Critics told him he’d never make it. Your voice is too high. Lose some weight. Duffy ignored them. “I was going to get somewhere, despite what everyone thought,” he later told the Globe and Mail.

Determined to make his name as a political reporter, Duffy moved to Ottawa in 1971 to work on Parliament Hill. After two years with CFRA Radio, he jumped to CBC Radio, then, in 1977, to CBC-TV’s national news. The jolly DJ from P.E.I. had confounded his critics and made it to the show.

Once he got to the top, Duffy worked even harder, earning a reputation for edgy reporting. He covered the fall of Saigon, won an ACTRA award for his coverage of a terrorist attack on the Turkish embassy in Ottawa, and provoked Brian Mulroney into suing him and the CBC over a story about how Mulroney’s goons backstabbed Joe Clark.

But by 1988, after 10 years as Peter Mansbridge’s sidekick, Duffy yearned to see his name in lights. When Baton Broadcasting offered him a small fortune to host his own politics show, he seized the opportunity.

Now he had a pulpit to sell the “Duff” brand and transform himself into a million-dollar enterprise – the Don Cherry of Canadian politics. He worked the Ottawa cocktail circuit and boasted about partying at “Joe and Maureen’s,” made after-dinner speeches at the Rideau Club, and bragged that he was doing “charity things with Mila.”

“That’s where you start to believe all the flattery, believe you’re bigger than the story. The affliction gets worse, the head swells up and anything that threatens your celebrity becomes a problem.”

In 1990, we introduced a Duffy lampoon called The Puffster, which ran for seven years, much to Duffy’s fortnightly fury.

Then we nominated Mike for our 1991 Eyesore of the Year award. Geoff Heinricks, creator of The Puffster, wrote: “Duffy is the journo who told TV Guide that he knew where the bodies were buried in Ottawa, what scandals went untold, but that he would always keep silent about them, in the public interest. This isn’t a journalist, it’s a co-conspirator.”

The bad blood came to a boil in February 1995. Mike did a phone-in for CFRA and said he was calling from Duke University, where he’d been discussing politics at the school’s Centre for Canadian Studies.

We called the centre and discovered it was closed for the semester.

Then an anonymous tipster told us the real reason Duffy was in North Carolina. McGregor called the Duke weight reduction clinic to confirm the story: “Mr. Duffy can’t come to the telephone,” the receptionist says. “He’s on the floor, doing exercises. Can I take a message?”

Bingo! We had our story. But we got carried away and hyped the headline: “Mike Duffy: Fat-faced Liar!”

Duffy goes berserk and launches a $600,000 libel and defamation suit.

Duffy chews the scenery, and bursts into tears as he describes his years of torment at the hands of Frank.

Then he raves about the hundreds of thousands of dollars we have squirreled away in secret offshore bank accounts.

During an adjournment, Duffy marches up to me in the hallway: “I know a lot of people, a lot of judges in Ottawa,” he snarls. At that moment, one emerges from his chambers and waves, “Hi, Duff!”

Then, a miracle. Testifying at his examination for discovery, Duffy inadvertently throws us a lifeline.

When our lawyer, Will McDowell, inquires about the awards and honorifics Duffy accumulated over the years, Mike replies: “I would like to have the Order of Canada before my mother dies. She’s 80 years old. I’ve been nominated three times and three times the message has come from the Privy Council Office on the back channel that Frank is the reason you’re not going to get it and Frank is the reason your mother is not going to see you win this award … (this) makes my blood boil.”

Could you identify your “back channel” source?, McDowell asks.

McDowell can barely suppress his glee. Duffy just shot himself in the foot. His preposterous testimony leaves Jean Chrétien exposed to a subpoena. If Duffy takes us to trial, it would be Mike’s word against the prime minister’s. Independent committees choose Order of Canada nominations, not the PM. Chrétien would deny Duffy’s allegations.

Duffy dropped the trial idea and agreed to an out-of-court settlement of $30,000. It still was a bitter pill, but, at last, Mike and I were free of one another.

I hadn’t heard from Duffy for seven years, but shortly after we launched eFrank into cyberspace in the fall of 2005, he called out of the blue to say he was having problems logging onto our new site and, oh, by the way, did you hear the latest about Peter MacKay?

Huh? Is that really you, Mike? Sworn enemy of the satirical press, gracing us with a hot story tip? Yes, indeed, and for the next three years, he proved to be a wellspring of gossip, promoting his Tory chums and attacking colleagues he disliked at CTV.

Of course, it couldn’t last.

We quarrelled over a story about Duffy’s old drunk driving conviction, and he started muttering about another lawsuit.

Before he could make good on that threat, however, both our worlds turned upside down.

In October 2008, Frank stopped publishing. Two months later, Duffy got the Senate seat he’d been auditioning for the past 20 years.

These days, the ruckus over his residency has the embattled senator scurrying out back doors and hiding in hotel kitchens to avoid inconvenient questions from the media.

I remember a time when the old Mike Duffy, award-winning CBC reporter, would barge through those kitchen doors and demand that Senator Duffy explain himself.

But that was long ago.

4 comments on “Memories of Mike Duffy”