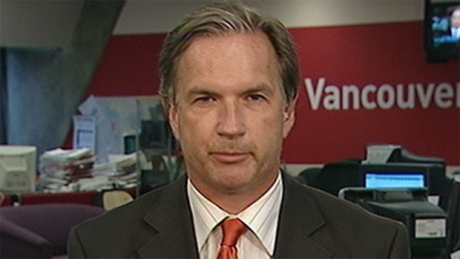 Much hilarity among media mavens at news that Kirk LaPointe is running for mayor of Vancouver.

As anyone who ever worked for him will tell you, LaPointless couldn’t run a bath, never mind the country’s third largest city.

He’s bounced from Canadian Press to Southam to the CBC, the National Post, the Hamilton Spectator and the Vancouver Sun. But for sheer ineptitude, it’s hard to beat his two years as boss of CTV news, circa 2002.

LaPointless had been anointed by CTV supremo Yvonne Fecan to lead the network into the age of convergence. But he soon alienated his underlings, then pissed off CTV’s news franchise, Count Floyd Robertson.

Kirk’s problem, as Vancouver voters will discover, is that he’s never learned how to fake sincerity. He makes colleagues aware that he has a very large brain–and they don’t. Floyd, on the other hand, has a small brain under his quiff, and he doesn’t appreciate being reminded of this shortcoming.

In one email contretemps, LaPointless questioned the validity of CTV news covering a fire in Toronto.

“You don’t want us to do fires anymore?”

“Oh, no,” LaPointless replied, “I was just talking as a viewer.”

“Are you a viewer or the boss?” Floyd snapped. End of exchange.

New to television and with all the charisma of an apprentice mortician, LaPointless was a disaster. He lost control of the flagship news show and he had no remedies for the collapse of Canada AM, which tanked after Lisa LaFlameout and Rod Black took over from Valerie Pringle.

Then came his signature balls-up, the bungled downsizing of 130-odd CTV hacks, including Ottawa reporter Jim Munson, into a PR disaster.

He probably had good reason for firing Munchkin—the guy hadn’t broken a story since Gerda Munsinger blew George Hees—but instead of giving Munchkin a massive pay-off to shut him up, LaPointless made the execution a noisy, public affair.

For a brainiac, Lapointless was clueless about Munchkin’s enormous popularity with Ottawa Liberals, in particular Jean Crouton, a Munson golfing buddy, who was tight with Fecan.

He made matters worse by dumping Munson without consulting Ottawa bureau chief Craig Oliver, leaving Magoo to break the news to staff in a memo, which he bungled: “Jum (sic) has had a great career in radio and TV journalism and I know you will all miss him as much as I will….”

Within hours of Munson’s exit, Robertson and Oliver were on the blower to Fecan, demanding he shitcan LaPointless.

Yvonne obliged and Kirk shuffled off, just one of those guys who always amazes by stumbling forward, leaving everyone shaking their heads at the messes he leaves behind, and carrying with him the latest book on how to be a top executive.

8 comments on “The LaPointless Principle”