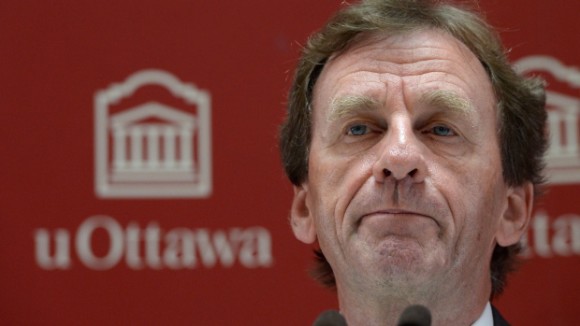 So farewell, then, Allan Rock, who ends his pisse-pauvre shift as University of Ottawa president June 30. But it’s not goodbye so much as ‘what, you again?’, as El Presidente transitions effortlessly into a full professorship at U of Zero’s Faculty of Law.

Rock’s 2013 contract renewal as president, which locked him in for another three years at $395K per annum (topped up by his parliamentary pension, not unadjacent to $75,000) also acknowledged his 2008 promotion to full, tenure-tracked professor.

What a coup for the much-unpublished Rock, unencumbered as he is by a PhD or the YULEs (years of full-time university-level experience), the university typically requires of its full professors.

What are mere qualifications next to Rocky’s rich life experience as UN ambassador, and his long years fucking up ministerial files like the stumblebum Airbus prosecution, gun registry debacle, etc., etc?

Rock did not disappoint, either, in his many misadventures at U of Zero, of which the Gee Gees hockey five-holing scandale and snap suspension of the entire team was only the most egregiously mishandled.

“Rock shot from the hip,” said one of his admiring U. of O. law colleagues. “Without any due process framed by a presumption of innocence, and without hearing the individual players’ side of the story.”

Non-rapist members of the hockey team last year launched a $6-million class-action lawsuit against the school and Rock.

“He failed the most basic precepts of administrative law, which we teach in year one of law school,” Professor X adds.

Happily, Professor Rock will have ample opportunity to brush up. His first order of business will be a 19-month sabbatical, at full presidential salary, bien sur, to prepare himself for the rigours of academe. That’s $625,000 to not work there, leaving plenty of time to putter away on RockGarden Medicinals, the family marijuana startup, with wife Debbie Hanscom (Franks passim).

Herr Not-a-Doktor Professor will then embark on a three-year contract starting February 2018, at 130 per cent of the maximum salary for a full professor, some $222,416, as he plumps up yet another public sector pension!

That Rock contract in full: allan-rock-employment-contract