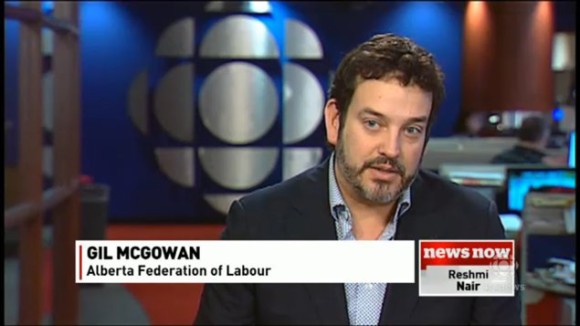 Now that Gil McGowan has thrown his hard hat into the ring, Frank looks forward to a down and dirty federal election campaign in Edmonton Centre.

McGowan, rebarbative supremo of the Alberta Federation of Labour, has ambitions to be the Knee Dip candidate in a Tory stronghold previously occupied by CPC warhorse Laurie Hawn, lately retired to the glue factory.

According to McGowan, he’s already received blessings from Tom Mulcair and Rachel Notley. In his coming out speech, Gil made like he communes regularly with the ghost of Notley’s pater, Grant, who dispenses fatherly advice.

Apparently the clueless NDP brass is unaware that McGowan–much unloved among Alberta bolshies–sports the sort of resumé that would make even a Tory blush.

Robocalls? Gil knows all about ‘em.

His AFL, which represents 160,000 workers in Alberta, was fined by the CRTC last summer for violating rules with their 2012 provincial election demon-dialers.

They forgot to provide a toll-free number and mailing address where they could be reached at the end of their spam calls (heartfelt pleas, shurely?!—ed.)

The AFL again ran afoul of regulators earlier this year and had to remove excessively partisan content from one of its websites.

Then there’s Gil’s drunk driving mishap of 2013, when he stacked up his car in the early hours of the morning and was charged with impaired driving and having a blood-alcohol content over the legal limit.

Fortunately, Gil’s lawyer was able to get him off on a breathalyzer malfunction technicality and charges were dropped.

Any day now, Gil will send his fartcatchers to have a word with his rivals, urging them to step aside and make way for Himself as the only “high profile” candidate.

He tried a similar tactic prior to the 2012 provincial election, urging Lori Sigurdson, new minister of Labour with the Notleys, to step aside and let him run. She told Gil to blow it out his shorts.

Unsurprisingly, Sigurdson and her caucus colleagues were nowhere to be seen at Gil’s candidacy announcement last week.