At The Bar: Kinsella v. Kid Kodak in LSUC throwdown

My grandmother, God rest her eternal soul, [said]: “Once you’ve decided to clean out one toilet, you may as well clean out all the toilets.” Well, she didn’t actually say that, but I can see her saying that. And it makes sense, don’t it?
—Warren Kinsella.

While luckier Liberal lobby lizards line up to loot the Liberal candy store, poor Warren Kinsella finds himself left out in the cold, nose pressed to the window. All those goodies; so near, yet so far.

The punk poseur is currently registered to lobby his onetime Grit buddies for a single client, er, Sears Canada.

Tellingly, his representations on behalf of the Softer SideTM, according to monthly communications reports, have so far consisted of last-days-in-the-bunker meetings (Oct. 6 and 7) with David van Hemmen, Harper PMO survivor, Duffygate person of interest and, at the time, Joe Oliver’s director of budget planning.

Has nobody in the office of Actual Finance Minister Bill Morneau so far found time for a chins-wag with Warren?

Chinchilla, readers will recall, ate well under the Tories, including a June 22 appointment as “special ministerial representative” to Minister of Indians Bernie Valcourt.

This bipartisan suckholing has been much-noted by the new Liberal order, as has Kinsellout’s bridge-burning tendency to throw blogshite at everyone who disagrees with him.

When former Byron Muldoon chief of staff Norman “Bluto” Spector pissed off Warren, he outed him: “Monte Solberg mentions me on his blog today. It’s funny. One part of it made me laugh out loud – the stuff about me being “worthy of [Spector’s] steel” or something like that. Heck, if you are a committed bachelor Big Tobacco lobbyist, that kind of visual gets you, um, all sweaty and aroused, don’t it? The hatred that dare not speak its name, etc. etc.”

Kinsella sang the praises of Adam “Son of” Radwanski until the Globe typist revealed that between 2004-05 and 2008-09, Kinsella’s company had been the lucky recipient of some $383,249 from the Ontario Liberals “without the checks and balances that accompany a public tendering process.”

That’s always been the Kinsella m.o.: Trash talk until the victim surrenders, or sue them into silence.

But now one of his countless targets is shooting back. After years of obsessive slagging from Kinsella, Andre Marin has filed a complaint against him with the Law Society of Upper Canada.

It’s a battle of the egomaniacs. In one corner, the “Printh of Darkneth,” in the other, “Kid Kodak”, lawyer, former Ontario Ombudsmidget and a publicity junkie who never took a selfie he didn’t love.

Marin’s case against Kinsella is summed up in this undated memo to Ombuds staff:

“He’s been running an ongoing smear campaign against me and the office for many years.

“The fact I am re applying for my job has caused him to greatly intensify his hateful and vile smear campaign…invited anonymous people to come forward and spew any lie or nonsense they want.

“He’s approved comments for example that suggest that my police officer brother disguises himself with a hoodie and stalks employees after hours.”

Turns out that LSUC takes a dim view of legalists crapping on one another. They’re expected to maintain professional conduct and treat quasi-judicial bodies, like the office of the Ombudsthingy, with respect. At least in theory.

@Ont_Ombudsman You are such an idiot.
–@kinsellawarren Mar. 13

@Ont_Ombudsman If you guys reappoint Kid Kodak, you will all be damned to eternal Hellfire.
–Ibid.

In another post, Kinsella asked, “Does [Marin] have a mental illness?” He soon hauled that down and reposted: Has he “lost his mind?”

What has Kinsella worried about Marin is that his complaint has reached the investigation stage. The vast majority of whinges to the law society are frivolous grievances that ultimately get vetted out. But Marin v. Kinsella is getting a serious look.

Perhaps the law society inquiry will reveal the source of his website’s “reader comments,” many of which sound suspiciously like Warren sock puppets: 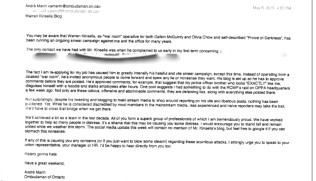