Late last year, as the RCMP began snapping on the blue gloves and circling Mike Duffy’s fundament, an unlikely ally rushed to the ramparts to defend the disgraced senator.

According to Levant, it was all part of a campaign by Ottawa and Toronto cops against their “conservative enemies,” i.e., Duffy, Rob Ford and Nigel Wright. The police were screwing over right-wing stalwarts by presenting the media with hundreds of pages of accusations, enough “to feed months of political scandal.”

“But the RCMP surprised even the anti-Conservative press gallery by positively consenting to release the confidential ITO (Information to Obtain), instead of the conventional police stance of opposing its release before a judge.

“Where is the ITO about Joe Fontana, charged with fraud?” bleated the free speech martyr manqué. “Where is the ITO for the ongoing police search of the Ontario Premier Kathleen Wynne‘s office?

And on and interminably on…

So what would inspire Levant to come to Duffy’s aid? 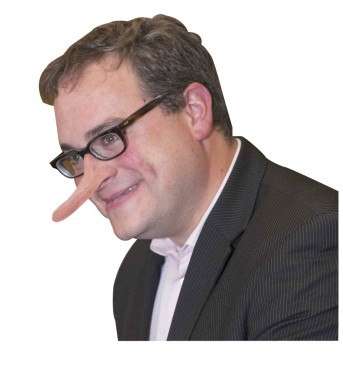 It could, indeed. According to sources close to the ol’ Duff’, Mike presented Ezra with 4,000 good reasons to defend him, and to hell with critics who might suggest that Ezra’s journalistic integrity (wat dat?!–ed.) is for sale to the highest bidder.

Did we detect a whiff of Ezra’s distinctive, er, rhetoric in Duffy’s rant on journalism to a Tory audience in Amherst in 2010?

“When you put critical thinking together with Noam Chomsky, what you’ve got is a group of people who are taught from the ages of 18, 19 and 20 that what we stand for, private enterprise, a system that has generated more wealth for more people because people take risks and build businesses, is bad,” puffed the Ol’ Duff’.

(To be fair, Duffy’s been pronouncing on commie j-skools for decades, with all the authority of a high school drop-out who speciously claims the University of Prince Edward Island as his alma mater.)

It must be noted that Ezra has never been too particular about who he sells out to. At the same time he was putting words in Duffy’s mouth, he was also peddling his doughy ass to Big Tobacco, as a highly-paid shill for Rothman’s.

Ezra sold Rothman’s his “ethical oil” strategy (bait-and-switch-the-conversation), and sold federal regulators the idea of cracking down on cigarette smuggling instead of increasing the size of health warning labels on packages.

The lobbying paid off.  Six months after Levant concluded his work for Rothmans, Health Canada abandoned its plans to increase the size of warning labels and announced that it would instead focus on fighting contraband cigarettes. (Health Canada has since changed its mind on label sizes.)

Alas, Ezra’s cosy relationship with Duffy might come back to bite him.

According to RCMP insiders, Ezra’s dough may have been extracted from the $65,000 slush fund Duffy allegedly funneled through his buddy, Gerry Donohue.

In that case, there’s a possibility Ezra will be called to elaborate under oath on his relationship with Duffy at his trial in September.