“Imam Sherif El Sayed of the Al-Rashid Mosque in Edmonton gives sermons saying that Muslim women in Canada must be obedient to their husbands in a way that would make a Saudi Arabian king proud.

“According to El Sayed, women can’t let anyone into the house, they can’t even leave their own house without their husband’s permission.

“Today [the Al-Rashid Mosque’s] goal is Sharia law. And a radicalization of Canadian Muslims. That mosque preaches the subordination of women, the marginalization of gays, and the killing of Muslim moderates.

“But, hey, there’s a few votes there for Justin Trudeau. It’s all good, right? When he’s behind closed doors at the mosque, he talks with the extremists themselves.”
–Ezra Levant, Sun Media, Aug. 20, 2014. 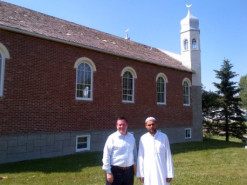 5 comments on “An Inconvenient Ezra”