The Fraser Institute, where every day is Tax Freedom Day

In its audit witch-hunt for politically incorrect charities, the Canadian Revenue Agency has somehow overlooked the merry band of wankers at the Fraser Institute.

While environmental groups nationwide undergo a collective colonoscopy from CRA, their tax-free status threatened for ‘advocacy,’ the Fraser, the most politically bent soi-disant charity in Canada, somehow manages to avoid the long, probing finger of the taxman.

Since its inception in the mid-seventies, the institute has spent some $100-million promoting its free-market agenda, collecting endowments and tax-free donations, all while serving as a propaganda arm for the Tories’ profit-venerating free market religion. 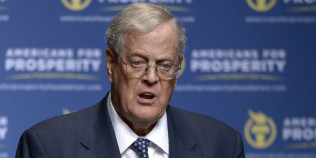 The Kochs kicked in nearly $500K to the Institute between 2008 and 2010. In step with the Tories’ energy policies, the Fraserites also received $175,000 in funding from Koch foundations between 2005-2008, one of some 40 climate change denial groups to receive funding.

The Fraser board is a who’s who of former conservative politicians, prominent businessmen, and pro-free market academics. Gwyn Morgan, former president and CEO of EnCana, is a long-serving supporter and member of the board of trustees. Ditto Steve Snyder, president and CEO of Transalta; W. W. Siebens, president and CEO of Candor Investments Ltd. and a Petro-Canada director since 1986, and John Hagg, former chairman and CEO of Northstar Energy Corporation and principal of Tristone Capital Inc.

As for its political advocacy activity, does the charitable Institute contravene CRA policy?

Consider that when the Tories won a majority in 2011, the Frasers immediately (and successfully) demanded President Steve change Canada’s election spending laws to abolish all per-vote subsidies for political parties.

Then came the Old Age Pension Plan. The Frasers insisted on changes and Harper obliged, increasing the age of eligibility from 65 to 67, although that was insufficient for the Institute, which demanded even more claw backs.

Then there’s the Fraser’s legendary research. According to the CRA definition, research is “factual information that is methodically, objectively, fully, and fairly analyzed.”

In that case, the Fraser is a tax-exempt joke.

Take, for instance, its recent report on obesity in Canada.

According to the Frasers, there is no obesity epidemic in Canada, it’s an invention of the nanny state, take my Big Gulp from my pudgy dead hand, etc.

While the institute’s media allies at The Sun and the National Post regurgitated the Fraser research as fact, Dr. Yoni Freedhoff, an Ottawa U. obesity specialist, destroyed the hundred-page report in a single blog post: “so biased, massaged, and cherry picked that it’s almost not worth commenting on.”

Dr. Freedhoff noted that the Fraser data went back only to 2003, conveniently omitting a tripling of self-reported obesity rates since the 70s. Oh, and self-reported lardassity, on which the Fraser relies, rather understates the problem, because as shocking StatsCan shows, people, when asked, lie about their weight. 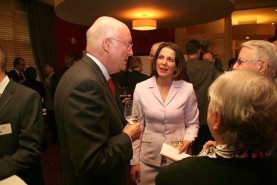 “And the [Fraser] chutzpah doesn’t end there,” Freedhoff wrote. “Despite the institute’s report asserting that obesity doesn’t dramatically increase mortality, later in this same report they state that obesity won’t be a burden on the healthcare system because those with obesity will die so much younger that their earlier than expected deaths will offset any potential increase in healthcare costs (and irony aside, following this logic, I’m looking forward to the Fraser Institute’s next likely report, The 3 Most Expensive S’s in Canada: Seat-belts, Street-signs and Speed-limits).”

Just another day at the Fraser folderol factory, which has a proud history of made-to-order drivel for paying customers – not only the Koch brothers dough to rubbish climate science, but also their fundraising shakedown in 2000 of tobacco companies in return for “research” whoppers about the benign and harmless properties of second hand smoke. (It’s hardly surprising that Fraser acolyte Ezra Levant went on to craft “ethical oil” nosestretchers and lobby for cancer stick purveyor, Rothman’s.)

All this selling of propaganda is hard work, but fear not, Fraser Institute executives are handsomely rewarded.
Take Michael Walker, for example. The glabrous institute founder—according to IRS Form 990 filings–pocketed $578,141 in salary, bonuses and deferred compensation in 2012.

His closest competitor in the Canadian charity sweepstakes, United Way Toronto pres and CEO Susan McIsaac, pulled in a mere $379,283 in compensation in 2012, and that’s for running an organization with total income of $154-million.
Fraser Institute’s total income for 2012 was some $10-million.

8 comments on “The Fraser Institute, where every day is Tax Freedom Day”