A season in public service hell

What a delight to see Tony Clement finally chime in on our Important National ConversationTM, declaring “zero tolerance” for workplace harassment.

The llama-lipped Treasury Board supremo has ordered his office to take harassment awareness training, and he’s demanding all public servants do the same.

And who will carry out Gazebo Boy’s latest marching orders? Janice Charette, newly-appointed Clerk of the Privy Council.

Few are better placed than our Janice to tackle the enormous challenge of eliminating harassment as we know it.

After all, she was involved in one of the sorriest wrongful dismissal/sexual harassment cases in recent memory: the story of Zabia Chamberlain, who Janice and her sluggos drove into chronic depression and PTSD.

In 2006, Chamberlain was an acting director at HRSDC, an EX-1 job with a six-figure salary. By 2009, she was out of the public service, claiming wrongful dismissal after she complained of sexual harassment.

Chamberlain says chronic abuse from her director general forced her to leave her job. In a 2013 interview with the Ottawa Citizen, she said the unnamed DG would stand behind her chair and massage her shoulders as he spoke or read emails she was typing. (According to ATIP documents released by the Public Service Labour Relations Board, Chamberlain’s boss was one John Atherton.)

“Whenever he rubbed my shoulders, it was always two hands on my shoulders and very, very close,” Chamberlain said.
At first she was too shocked to say anything. But after a few months, she spoke up: “Please stand back. Please don’t touch me.” 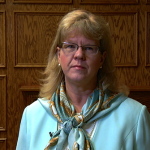 Sometimes Atherton would fly into a rage and storm into her office: “It was so volatile. He came into my office and slammed the door so loud, it’s the loudest sound I’ve ever heard. He swore. Don’t you ever fucking do that again.”

The harassment took its toll. She lost 25 pounds, was screaming and crying in her sleep. By 2008, she was seeing black spots, unable to feel her legs, sometimes vomiting at work.

She started applying for other PS jobs, but HRSDC refused to transfer her to an equivalent gig.

Co-workers say they witnessed her harassment. Some claimed they were themselves bullied by Atherton. Several swore affidavits. One was later told by a supervisor if she wanted to advance in government she should be quiet about Atherton.

In April 2008, Chamberlain filed a complaint with ADM Karen Jackson, who concluded that Atherton had “behaved improperly and he should have known that his behaviour would cause offence and harm.”

In December 2008, Chamberlain filed a grievance, which was dismissed the following February. Louise Branch, another HRSDC assistant deputy minister, wrote that she was “satisfied that management acted reasonably by conducting a thorough and fair investigation, ensuring the proper process and follow-up were done.”

In March 2009, Chamberlain – by then battling suicidal thoughts – took her case to the Labour Board, where it languished for three years in a process as punishing as the original abuse.

Meanwhile, HRDC tried to cover ass by getting Chamberlain to sign a declaration that her condition had been caused by a “third party,” rather than by their employee and her supervisor, in order to qualify for worker’s compensation. She refused.

In February 2010, Chamberlain’s sick leave and vacation days ran out, and HRSDC shitcanned her. Her only income was a monthly disability cheque from a private insurer that she’s expected to repay.

In a decision in December 2010, Labour Board member George Filliter ruled Chamberlain’s grievance out of his jurisdiction.

Her application for judicial review is pending before the Federal Court.
Meanwhile, most of the senior managers involved in the Chamberlain clusterfuck have either retired or moved up the public service ladder.

Oh, and our old friend Janice Charette, then DM of HRSDC, now Clerk of the Privy Council, and point woman on the new Agenda of RespectTM. Frank is confident that’ll work out just aces.

5 comments on “A season in public service hell”