News that Q host Jian Ghomeshi was a “tyrannical” egomaniac who created a “culture of fear” comes as no surprise to sluggos at The National. After all, they’ve been dealing with Peter Mansbridge for years.

Indeed, the “Red Sky” memo (in which Q staffers complained of being forced to work to their star’s “whim” and follow orders or “be punished in some way”), could easily have been written about Mansbingo.

At The National, it’s all about Peterkins, and anyone foolish enough to challenge the Giant of JournalismTM soon gets Gulaged. Remember Pam Wallin? Jason Moscovitz? Of course you don’t.

Earlier this year, she had the task of defusing the conflict-of-interest tizzy over Mansbridge and Rex Murphy accepting Big Oil payments for speaking engagements (see also: Cross Country Oil Check).

After months of dithering, however, McGuire posted a mealy-mouthed policy non-statement that had Mansbridge’s fingerprints all over it: “Tightening our procedures…centralize tracking for speeches…transparency… [more bureaucratic gibberish here]…”

Nothing happens on The National without Mansbridge’s say-so. From the lavish and fawning coverage of the Franklin expedition search (he’s on the Arctic Research Foundation advisory board), to the awarding of plum panel gigs, Mansbridge is da man. (David Herle of The Insiders panel is an old Mansbridge pal. Longtime panelist and golf buddy Allan Gregg was replaced last year on the At Issue team by another Petey chum, Bruce Anderson.)

All panels are up to him, ditto any big series on the flagship news show. He influences who will be hired as he must approve reporters and any regularly appearing guests on the show.

And the results speak for themselves: In the 26 years Mansbridge has presided over The National, ratings have gone from nearly two million viewers to approximately 430,000. 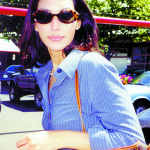 Meanwhile, 650 CBC hacks have waddled the plank this year and highly-regarded journos like Linden MacIntyre have stepped aside—without retirement incentives—to make room for younger talent down the food chain.

And speaking of younger talent, Mansbingo, like Ghomeshi, has always had a sharp eye for it.

In the early nineties, Wendy Mesley, nine years younger than Peter, got traded in for Cynthia Dale, 13 years his junior.

But another of Peter’s favourites proved a total pain in the ass.

Priapic readers of Frank, circa June 2007, will recall how Erickson turned up at one of the Speaker’s garden parties and stood by the main tent, posing for pictures with Tory MPs and cabinet members, who drooled obligingly.

At one point, light loafered Liberal MP Scott Brison threw Krista over his shoulder, Alley-Oop style. The sight of her ass in the air soon had members’ members rising on a point of privilege.

Afterward, Brison showed his hands to the gang and remarked that he “had calluses,” to which Krista quipped: “Because you’ve been beating off too much.” 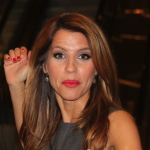 Near the end of the evening, she sauntered out with boyfriend Lee Richardson (then Tory MP for Calgary Centre), remarking loudly, “I won’t let you lay me tonight.”

Krista always had an uncanny knack for pissing off colleagues and reporters on the French side at Radio-Canada.

In a celebrated shriek fest with the late Tom Hanson, Krista yelled at the CP photog for getting in the way of her scrum shot.

“Are you clueless?” Hanson asked.

“If I’m so clueless,” Krista snapped, “How come I’m a national reporter and you’re just a button pusher?”

Eventually, Krista was suspended for allegedly writing questions for Liberal MP Pablo Rodriguez to nail Byron Muldoon in committee. Standard operating procedure in inbred Ottawa, but the Tories launched a complaint with the public broadcaster.

The CBC needed a scapegoat for the Erickson fiasco, however, and it certainly wasn’t going to be Mansbridge, despite the fact he was the one who’d catapulted Krista from hack supper hour anchor into a coveted gig on Parliament Hill, where she couldn’t be trusted with a story about a lost puppy.

No, the fall-on-your-sword award went to Ottawa bureau boss George Hoff. A loyal Corpse retainer for 29 years, all he got was a blindfold and a cigarette.

At the CBC, the cheese stands alone.