Herve Ngamby? Shurely it can’t be!

Though it might put gentler readers off their morning bowl of Jian’s Mix, Althia Raj, the Huffington Post’s sex harassment agony aunt, continues to deliver the downest and dirtiest reports from the front lines of our Important National ConversationTM.

It was Raj, readers will recall, who provided a sisterly shoulder and recorder for Dipper Christine Moore to anonymously share the seamy details of her alleged horizontal forced march with Liberal MP Massimo Pacetti.

(CP’s Jennifer Ditchburn and Joan Bryden did the same for Alexandrine Latendresse vis-à-vis her Scott Andrews problem, leaving their Y-chromosomed press gallery colleagues far up the track, pontificating about due process because they had fuck-all news.)

This week, the provincial NDP got a scorching from Raj via Genevieve Ratelle. The 20-year-old campaign volunteer says she’s gone to police with complaints about a much-married Ottawa-area candidate she worked for in last spring’s provincial election. Alas, she found the candidate somewhat over-eager to, er, press the flesh. 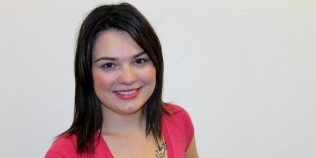 – “We got into his place and he told me his wife wasn’t there … then he pushed me against the wall, touched me and forced himself on me.”

– “Even though I was pushing him, I was held back and then he put his hands in my pants.”

– “That night, he came down three times to the room. Lay in the bed beside me. Every time I would ask him what he was doing, and he said he enjoyed looking at my body.”

Skeevy if true, but Ratelle insists she doesn’t want Mr. Grabby publicly named and the blameless Mrs. Grabby humiliated. She just doesn’t want him running again as a federal candidate in ’15.

But it is no secret that during last spring’s provincial election campaign, Ratelle worked in Ottawa-Vanier for the NDP’s great hope o’ colour, Herve Ngamby—who finished in third place, behind the Liberal rotten borough’s Madeleine Meilleur.

Indeed, many recall Ratelle’s May 15 Facebook post, which featured a photo of her with a man bearing an uncanny resemblance to Herve at Brixton’s, the Dipper-infested Sparks Street boozecan. The caption: “Proud political attaché with my candidate”.

Since this contretemps, she’s adopted a pseudonym on Facebook.

One comment on “Herve Ngamby? Shurely it can’t be!”