In case you missed it, Toronto Star typist Heather Mallick has been taking a slagging this week for dismissing criticism of a Star feature about health problems experienced by young women after they took the HPV vaccine.

When Dr. Jen Gunter joined others in the medical community to heap scorn on the story as alarmist and scientifically unsound, Mallick wrote her off as a “rural doctor whose slogan is ‘wielding the lasso of truth.’”

That triggered a rain of shit on Mallick from social media lynch mobs, led by the likes of Andrew “Batshit” Mitrovica, the noted guru of journalistic ethics and sanctimonious fraud.

But it all sounds like great fun to us, so without further ado, Frank hereby climbs on the anti-Mallick bandwagon with yet another republishing of the Frank Prank Classic: “Heather Mallick’s Bonfire of the Vanities.”

Return with us to the thrilling days of yesteryear, circa 2005, when Heather typed a weekly column for the Globe and Minion.

A Globe hack suggested that Frank readers might find amusing the email auto reply message Heather was sending out.

Curious, we shot an email off to HMallick@globeandmail.ca from a made-up account: daphnemerkin@yahoo.com.(Background: Daphne Merkin is a much-respected New York-based literary critic, essayist and novelist who, it turned out, Mallick worshipped.) 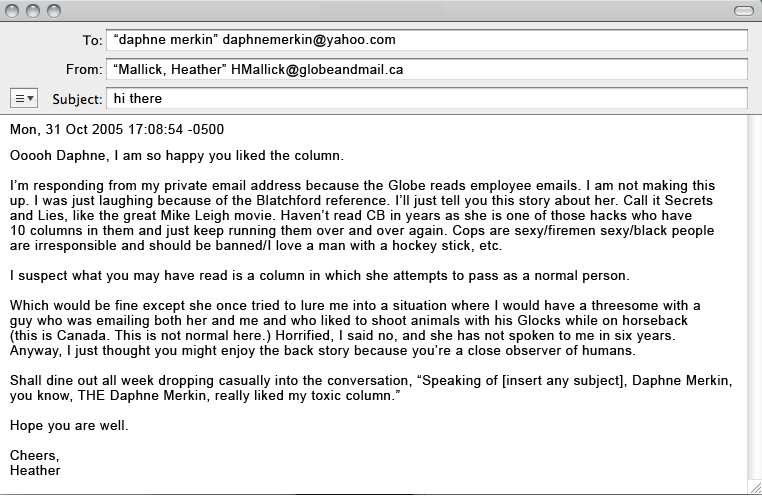 In the conclusion to her Globe column of Nov. 5, 2005, Mallick wrote:
“I have a word for Judge Alito. It’s Backpfeifengesicht, German for “a face that cries out for a fist in it.” 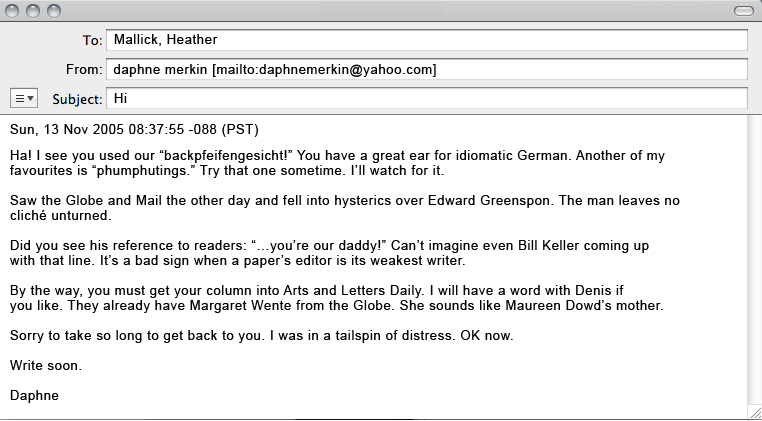