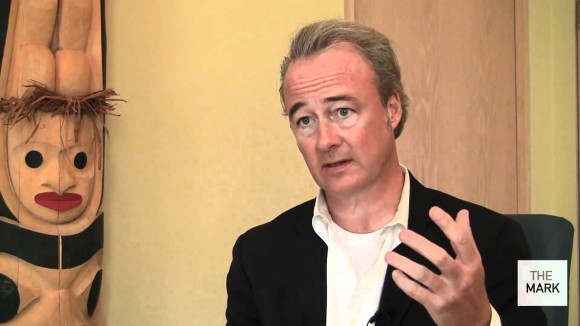 R.I.P. AND HAPPY BIRTHDAY, TUFF GONG
When Canada Goose was sold to a U.S. Hedge fund, I stitched this over their logo in protest. Today, I display it to remember Tuff Gong on his 70th birthday.
–Kinsellout, Feb. 6, 2015.

MIKE NICHOLS, RIP
As my Calgary high co-conspirators Lee G. Hill and Dan Nearing would tell you, The Graduate was always my favourite.  RIP, a great visionary.
–Nov. 20, 2014.

TOMMY RAMONE, RIP
I woke up to the bad news, and I immediately felt like going back to sleep for good. I tell ya: if there ever was news that I am going to kick off sooner than later, it’s the news that Tommy is gone. Me? I’m heading in to the office. I’ll be wearing the tee of them doing a benefit for Johnny Blitz at CBGB in May 1978, shortly after they changed my life forever.
–July 12, 2014.

DOUG FINLEY, RIP
Last communicated with him in an email exchange – about rock’n’roll, not politics. That tells me he had his priorities straight.
–May 11, 2013.

CHARLES KING, RIP
Charles and I were occasionally on different sides during the Liberal Party’s tribal wars. Throughout all of that, Charles was unfailingly decent, and always a gentleman, too.
I was very sad to learn of his passing, as I drove into Ottawa this afternoon.
–April 29, 2013.

NICHOLAS HOARE, RIP
I had two book launches at Nicholas Hoare, and both were special. I am very sad to see them go.
–April 1, 2013.

R.I.P. DICK CLARK
When I heard, in Spring 1980, that Dick Clark had invited PIL onto his show, I predicted it would be anarchic insanity, total chaos, and that the American Bandstand boss would profoundly regret his decision. Me and my punk buddies, then well aware of Rotten’s bottomless talent for destruction, thought that was the coolest thing. R.I.P., Dick. You were a punk.
–April 18, 2012.

ROBERT KROETSCH, R.I.P.
What an extraordinary man he was!  I know, because Kroetsch taught me in 1980, in my first year at the University of Calgary.  Without getting into too much detail, I was leading a pretty rock’n’roll lifestyle in those days, and doing all kinds of things I shouldn’t have done.  I missed a lot of classes and assignments, and I had rock-bottom grades to show for it.

One day, I got back an essay I had written for Kroetsch’s English class.  I don’t remember the grade, but I certainly remember every word of what he wrote:

YOU ARE DESTROYING A GREAT TALENT.  ROBERT KROETSCH.

I remember reading those words like they were written yesterday.  They had the desired effect, too.  I resolved to get my act together – so I quit what I was doing, transferred to another university, and ended up graduating in a lot better shape.
–June 22, 2011.

CHARLIE LEWIS, R.I.P.
This makes me sad. I used to work with a Charles Lewis at the Ottawa Citizen. He was a wonderful, thoughtful guy. There was no bigger supporter than him for the work I was doing exposing the religious right and the far right.  No one.

That’s why I’m sad to read tripe like the linked column – the hackneyed, clichéd, anti-CBC and anti-secularism/pro-Harper and pro-religious right claptrap that the Post churns out, endlessly, while completely indifferent to the effect it has on its circulation and/or credibility.  When I wrote for them, they – the great free-speechers! – refused to let me print a goddamned word that was positive about the CBC, the Star or related subjects.  When they also refused to let me say what I wanted to say about protecting human rights, I quit.  Now, I only read them online, and sporadically at best.
Anyway.  The Charles Lewis I knew isn’t the Charles Lewis I see in the Post this morning.  He’s left the building, and I sure miss him.
–May 12, 2010.