The Devil and Ms. Gallant 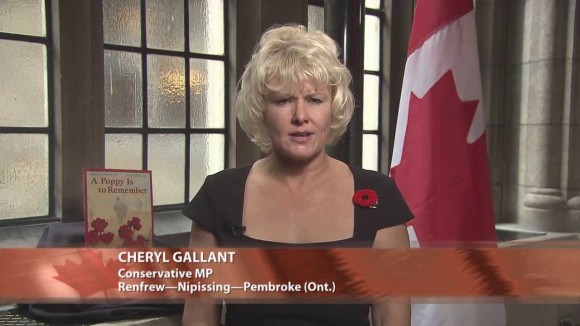 What larks to see Cheryl Gallant (Con.–Renfrew-Nipissing-Pembroke) back in action, up on those sturdy hind legs in the House of Commons to denounce the sinister Kathleen Wynne/Ben Levin plot to sex up our children:

“Mr. Speaker, if anything demonstrates the need for the House to quickly pass Bill C-26, our Conservative legislation for tougher penalties against child predators, it is the decision by the Liberal Party in Toronto to introduce sweeping changes to how grade school children are taught sex education.

“This curriculum was written by someone charged with two counts of distributing child pornography, one count each of making child pornography, counselling to commit an indictable offence, and agreeing to or arranging for a sexual offence against a child under 16. As a hand-picked provincial Liberal deputy minister, this powerful party insider was caught only after an international online probe. If withdrawal of this Liberal policy can prevent one child from being groomed for exploitation, it really must be withdrawn.

“On behalf of the parents, grandparents, and the vulnerable children of Ontario, we demand that the federal party leader order this outrageous policy to be withdrawn now.”

There was a time (after her fag-bashing helped torpedo them in the ’04 election, for example), when the Tories would hide the evangelically-coifed nutbar’s light under the nearest bushel.

But that was before the Strong, Stable MajorityTM.

These days, her tar-pit jabberings from the backbenches serve as a helpful prophylactic against rumblings in the base that since gaining power, the party has drifted from its paleo-Christian white-makes-right roots.

Whether opining on shiftless Atlantic layabouts waiting for nanny-state Coast Guard to pull them out of the deeps, telling PTSD sufferers in the Canadian Forces that any stigma attached to their condition is all in their scrambled little heads, equating jihadi beheadings with abortion or Liberals with Nazis, Cheryl has always been a voice of sanity and compassion in the Tory’s bible-bashing caucus.

As for sex-ed, nobody is doubting the bottle-blonde mother of four’s authority to home-school on ye birdz and the beez. A few years ago, small-minded small-town gossip at the Pembroke Curling Club placed one of the Gallant girls on a high school bus where the tedium of a class trip was relieved by skin flute improvisations.

Suspensions ensued for some of the curious young participants, but Frank is absolutely certain no Gallants were among them. The fruits of Cheryl’s loins are, after all, guided always by the lodestar of fambly values.

Gallant herself has been a gossip magnet since her 2000 election triumph over Liberal professional jockey Hec Clouthier. Even her unwavering loyalty to flat-ab’d flatearther Stockboy Day during his shambolic leadership, which saw her elevated to the lofty office of deputy house leader, was the subject of much ill-informed innuendo.

Ditto when she tried to save taxpayers a bit of money by moving into recently-divorced party stickman Jay Hill’s spare room (When he abandoned the party to protest Stock’s ineptitude, Cheryl moved out on him without notice).

Ottawa dish queens nearly wet themselves, though, the night the fire alarm went off at the Holiday Inn in the Byward Market.

Spotted among the guests milling sleepily around the lobby were a jammie-clad Gallant and then-seatmate Paul Forseth, also in dishabille.

Both promptly busied themselves pretending not to be there.

2 comments on “The Devil and Ms. Gallant”