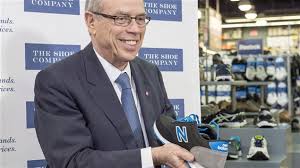 I see the tin-eared Little ShitsTM in the PMO have another cock-up on their hands.

It was President Steve’s operatives who dreamed up this year’s gimmick for Joe Oliver’s traditional pre-budget shoe op.

The llama-lipped finance minister elected to lace up a pair of black sports shoes, trimmed in Tory blue and manufactured by U. S.-based New Balance (geddit!?!—ed.)

Alas, nobody thought to check out New Balance’s record of corporate citizenry. It stinks.

New Balance headquarters may be in Boston, but that’s a cover of convenience—and profit. In fact, the firm is American in name only, since most of its production is outsourced in China and, like their notorious rivals, Nike, Puma, et al, they’re the subject of withering campaigns of criticism from labour groups and consumer watchdogs.

Behind the window dressing of on-paper ethical codes and stage-managed cheerleading, New Balance has a history of union busting, hiring underaged wom–er, girls and producing tens of thousands of shoes in sweatshops in the Far East.

A report by Play Fair prior to the 2008 Beijing Olympics revealed that a little known Hong Kong manufacturer named Yue Yuen produces one-sixth of the world’s sports shoes, and counts New Balance among its most important clients.

One worker at a Yue Yuen factory producing for New Balance in Dongguan, China, told Play Fair, “I am exhausted to death now. The two of us have to glue 120 pairs of shoes every hour…. We are working without rest and are always afraid of not working fast enough to supply soles to the next production line… We are tired and dirty.”

At another Chinese factory that is a major supplier for New Balance, workers were subjected to physical and verbal abuse, discrimination based on gender, age, height and the province they hailed from, long work hours, denial of legally required benefits, and routine 10 hour shifts, six days a week.

The Conservatives: party of hard-working families.