How deliciously ironic to learn that of all people, the Hon. Rev. Dr. Senator Don Meredith has been bounced from the Tory caucus, this after getting caught with his bespoke pants down and getting a legover with a teenager.

The Toronto Star reported last night that the young woman, now 18, began the relationship with Meredith “soon after she turned 16.”

Shurely this cannot be the same hard line social conservative Dandy Don who has actively campaigned against pre-marital sex and pushed for raising the age of sexual consent to 18!

“The relationship with Meredith began with sexually explicit chats over Skype and Viber in which Meredith asked her to remove her top and underwear. She said he then masturbated on camera,” the Star reported.

“When the senator broke it off earlier this year, he told her in a text message that he did so because “God has spoken to me and am (sic) not happy with me . . . I should be leading you not making you.”

Longtime senate watchers have been waiting for Meredith to implode ever since he arrived in the upper chamber in 2010.

Tales of his libidinous adventures were popular around the senate and gossips referred to the Hon. Dr. Senator as “BBC,” an acronym for a crude bit of racial stereotyping that has no place in a family magazine (‘Bigger, Better Conservativism’ shurely?!–ed.)

Last week it was revealed by CTV that Meredith was under investigation by the senate for “allegations of workplace sexual harassment and bullying.” 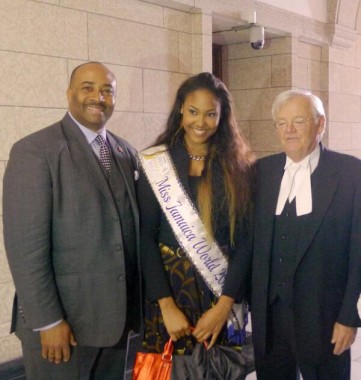 Among the employees no longer in Meredith’s employ are executive assistant Julie Flannery, who accompanied the senator on vital senate business in Jamaica in 2012. Sadly, Julie exited the senator’s office to go on stress leave.

Likewise Isabelle Lapointe, pneumatic former assistant/legover to Tory Senator Pierre-Hugues-Boisvenu, who found herself in need of a new gig after their horizontal jogging came to the attention of the senate. She landed in Meredith’s office but lasted only a few months before fleeing to the service of Senator Lynn Beyak.

Now the Tories are regretting the day they first tapped Meredith as a candidate to run in the by-election for Bill Graham’s seat in Toronto Centre in 2008.

They already had the ideal candidate in Mark Warner, a native of Trinidad’n’Tobago with intellectual heft; a trade lawyer with a Masters in economics.

Alas, Warner proved to be too socially pink for the Tories–and insufficiently deferential to party HQ. He was forced to waddle the plank.

Enter Dandy Don, a black, evangelical preacher in tailored suits, who once told the Ottawa Petfinder, “People have told me I have presence and flair. I try to have swag.”

He was a bracing throwback to the old Christian right wing Reform party, close chum of Julian “Hang ‘em High” Fantino and Monsignor Jason Kenney, who threw $250 at his election war chest.

But during the campaign, Meredith contracted Florsheim-in-mouth disease, telling voters that folks got bedbugs because they had poor personal hygiene.

He followed that up with the remark that sexual orientation was a simple matter of choice (this in the largest LGBTQ pansy patch in the country.)

In the event, Meredith received only 12.5% of the vote, finishing even behind the Green candidate.

But the Tories know a winner when they see one, even if electors don’t, and President Steve tapped Don for a berth aboard the senate gravy train in December 2010.

When he came to Canada from Jamaica in the early eighties, Dandy was an easy-going kid, a soccer playing ‘teen who went to high school and then “attended” Ryerson Polytechnical Institute.

That’s what it says in his Wiki entry. In his Parliament of Canada website, however, there’s a different version of his time at Ryerson: “He completed several years of business and information technology studies.”

In any event, he certainly didn’t graduate, but still went on to establish Donscape Landscaping, a successful, er, landscaping business.

But his failure to finish at Ryerson haunted him over the years, and he become obsessed with collecting honorary degrees and dubious achievement awards.

Take, for example, the claim in his thickly padded resumé that he “holds a master’s degree from California State Christian University.”

Curiously, calls to the 800 number on the school’s website get “hardwarebundler.com”, a company in Orlando, Fla., (“press ‘2’ for technical support.”)

Another number for California State Christian University, this version on Wilshire Blvd. in L. A., got a chiropractor’s office with the phone message, “If it’s an emergency, call 911.”
(Note: CSCU might well exist. We just couldn’t find it.)

Dandy’s c.v. also includes an “honorary doctor of divinity” degree from the Canadian Christian Clinical Counselors Association. No website for the CCCCA could be found.

Petty credentialing quibbles aside, there now seems little doubt of the good Doctor-Reverend-Senator’s qualifications and aptitude as a youth counselor.