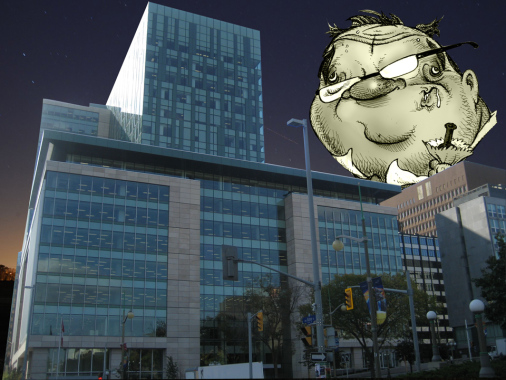 Thus does the proven lawyer finally realize his burning desire to serve the public, so cruelly denied by electors in Ajax-Pickering, when he stood for the provincial Tories in last year’s running of the reptiles.

Todd J. is of course eminently qualified for the part-time earner (annual retainer up to $13,000 and per diems topping out at $665), not the least as partner at Flaherty McCarthy LLP, former home of the late, great Saint James Flaherty.

That would be the firm formerly known as Flaherty Dow Elliott & McCarthy LLP, before last December’s instalment of another O’Booze partner, Grant Dow, on the bench of the Superior Court of Justice (Franks passim).

Frank further imagined O’Booze belching (beaming, shurely?!—ed) with pleasure from his heavenly vantage back in February at the inspiring elevation to the Superior Court of Phillip Sutherland, another fine legal mind and former president of the Canadian Association of Black Lawyers (CABL).

Back in 2009, during the Widow O’Booze’s first kick at the Ontario PC leadership can, while Jimbo himself coughed up a mere $5,000 for Christine’s war chest, Sutherland dug deep with a public-spirited contribution of $25,000 – with, bien sur, no expectation of future repayment, favour or advancement.