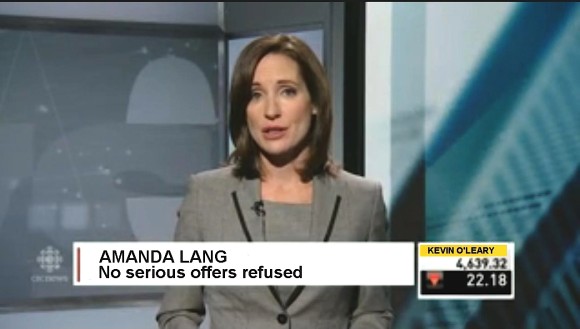 So farewell then, Amanda Lang.

As predicted by the satirical press, the CBC has decided to ditch its problematic Chief Business Personality.

Lang has been in a death struggle with Corpse news boss Jennifer McGuire since January, when Lang took to the Globe and Mail to deny allegations that she was too cozy with her chums in the banking biz and that accepting paid speaking gigs from the likes of the Royal Bank in no way compromised her journalistic integrity (wat dat?!—ed.)

Pissed that she went public without Corpse approval, McGuire began lobbying CBC eminences Heather Conway and Hubie Lacroix to punish Lang for intentionally embarrassing the Corpse while it was still staggering from the Ghomeshi scandale.

But her union and Lang devotee Peter Mansbingo rushed to her defence and she escaped with only a slap on the wrist: One day’s suspension (with pay!)

But McGuire banished Lang from The National, limiting her to a handful of brief business reports.
Meanwhile, Lang’s nightly biz show, The Lang Exchange, has been a disaster. Ratings have gone south since Kevin O’Leary exited last year and the show’s brain trust has flailed about in search of fresh ideas.

The writing was on the wall at last month’s CBC Upfront, the 2015-16 season preview gala. Dozens of other CBC personalities were in attendance, even Michael Wekerle’s Genitals of Dragon’s Den. Lang, however, was mysteriously absent.

Asked directly if she was returning, a Corpse exec: “We haven’t had the conversation yet!”