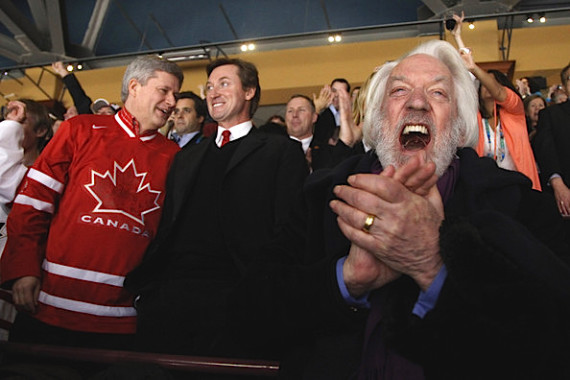 Amid the two-minutes-for-looking-so-compromised torrent of opprobrium against Wayne Gretzky for his latest suck-up photo-op with President Steve, a lonely, servile voice of sanity strains to be heard.

Leave it to Toronto Sun comfort bear Joe Warmington to inject a vital corrective to the baseless smears against the millionaire ex-pat as a sell-out and shill: “Not a good Canadian? How about one of greatest Canadians ever!”

“Gretzky may live in the U.S. but unlike some of the others, he’s here every month doing something charitable,” quoth Wormington. “I have seen it. I remember one time with the Kings he put the name of a cancer kid on his helmet so the boy’s parents could bury him in it.”

99’s good works for, er, cancer kids aside, Joe Drool cited his usual unimpeachable and unnamed sources as he floated the pants-pisser that “partisan politics is not Wayne’s thing.”

Wait a minute! It’s not like The Wayner started goose-stumping for rightist grotesques yesterday.

The 2003 Iraq invasion hadn’t been underway for 72 hours when the Great One showed up to shake his pom-poms for Dubya Dubya Three: “All I can say is the president of the United States is a great leader, I happen to think he’s a wonderful man and, if he believes what he’s doing is right, I back him 100 per cent.”

Now, Wayne may be easy, but he ain’t cheap. According to the All-American Speakers Bureau, the Adequate One’s appearance and speaking fees top $100,000 a pop (U.S. greenbacks, please!)

So did the Tories shell out 99’s full price in return for his endorsement, or did they get a benevolent discount?

Or, in the alternative, did the Harper puck bunny patriotically volunteer his services to the party gratis, thereby making a six-figure, non-monetary campaign contribution, originating outside of Canada?

He didn’t come back for you.