Bob Fife’s reach for the top 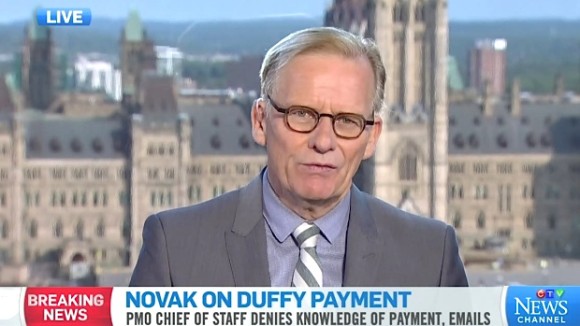 Bob Fife changing chairs, abandoning his CTV quasi-stardom for the warm embrace of David Walmsley’s Globe and Minion was the talk of the town Thursday, especially since St. Justin is on the far side of the world.

1. Always improbable as a television personality, Fife made it work for a decade, largely on the basis of his preternatural ability to find scoops. (Nigel Wright’s $90,000 cheque was his exclusive.) But even the endless coaching sessions and Warby Parker glasses never made anyone forget Walter Cronkite. His roots at The Canadian Press, the Sun chain and the late, if not entirely lamented, Canwest chain were filled with old-fashioned foot-in-the-door reporting, and the Globe is desperate for same.

2. CTV loses a workaholic willing to do Canada AM at dawn, and still be filing live to Lisa LaFlammeout at 10. And it has no credible successor to Fife.

3. The Globe bags a scoop machine into a bureau that, with only sporadic exceptions, hasn’t done much Hey Martha! reporting since the sponsorship scandal, now 13 years ago. How Fife will fit into the Globe’s convoluted supervisory structure – there’s a national editor, a political editor, a deputy editor and an editor-in-chief who have played in Ottawa for a decade for various employers – is uncertain. (Time was when a Chapleau, Ont., boy was never going to get into the Ottawa bureau of the G&M, never mind become its top dog.)

4. And he gets an open field. The Ottawa Citizen has lost one of its best to Harvard for a year (Steve Maher) and Glen McGregor (who teamed up with Maher for the Robocalls and Dean Del Mastro scoops), now has to do bi-monthly weekend shifts on the desk. The Toronto Star’s investigative talents don’t run to the Rideau, and Rob Russo’s CBC bureau is still trying to achieve liftoff. Radio Canada and La Presse break some stuff, but it doesn’t seem to travel well to Angloland.

5. Less certain for our hero, however, is how pleased he will be with the money. Legendarily tight-fisted on salaries, the Globe is unlikely to have matched CTV’s star-inflated pay rates. Safe to say that Fife’s continued hosting gig on Question Period will go a long way to keeping his T4 slip in the $250k range. (But is there a more awkward program title than Question Period with The Globe and Mail’s Robert Fife. Doesn’t trip off the tongue like True Detective.)

6.Fife gets out just as the tumbrels are rolling in earnest at Bell Medialand. Hundreds have been laid off across the country in the last 10 days. That means that anyone lucky enough to have a lifeboat would be more than usually tempted to leap onboard.

So the trick at 444 Front will be to keep Fife happy and productive. The Robyn Doolittle experiment, in which Rob Ford’s nemesis was lured away from the Toronto Star, has not been a triumph.

Will Fife get enough room in the Globe’s tight news hole and attention from his bosses to keep him purring?

One comment on “Bob Fife’s reach for the top”