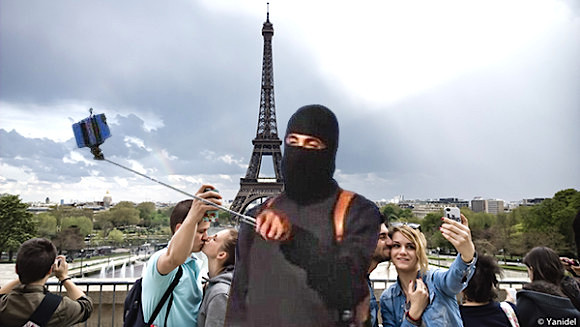 The shooting at the Bataclan, where Quebec bands like Beau Dommage have performed…
– Michel Arsenault, Globe and Mail.

Former Citizen editor Keith Spicer, who lives in Paris, said the French government had been warning for months it was expecting another terrorist attack after the shootings at the offices of the satirical magazine Charlie Hebdo last January.
– Tyler Dawson/Don Butler/Alison Mah, Ottawa Citizen.

Recorded live during last night’s events. Charles [Adler] and I speak to a Canadian woman, hiding in a Paris bookstore during the attacks; we listen to a shaken Justin Trudeau, and wonder if his ISIS decision will now (and must now) change; and we discuss my son’s Facebook post, which has now been seen by 65,000 people around the world.
– Warren Kinsella, warrenkinsella.com.

Owners of a Toronto multi-media company, Kelsey Cole, 27, and her partner Angelo Dodaro, 28, arrived in Paris Thursday and planned to stay there two or three weeks while filming Charting Happiness, their documentary about defeating depression.
What they said they wandered into was “the war on happiness.”
– Jenny Yuen, Toronto Sun.

Harriet Lye went to see the new James Bond movie at a theatre Friday night in Paris — where the theme is “good triumphs over evil” — and afterwards, unknowingly came out into a darkened and chaotic city where much blood had been shed.
A half-hour after the attacks, Lye, a 28-year-old Toronto writer living in the French capital, exited the underground cinema in Les Halles in the 1st arrondissement, and walked south with a friend to the Shakespeare and Company bookstore, located below her apartment. When she arrived, she found a number of customers taking shelter inside the nook, listening to whatever news was breaking.
– Ibid.

I’m writing this note from Gate A51 of the Montreal airport. I’m about to get on a flight to Paris, France.
That might strike you as a rash thing to do, the day after Muslim terrorists launched five attacks around that city, murdering at least 129 people and injuring 352.
I won’t lie — it wasn’t an easy decision, especially when my young kids asked me if I’ll be safe “from villains”.
– Ezra Levant, Rebel Media.