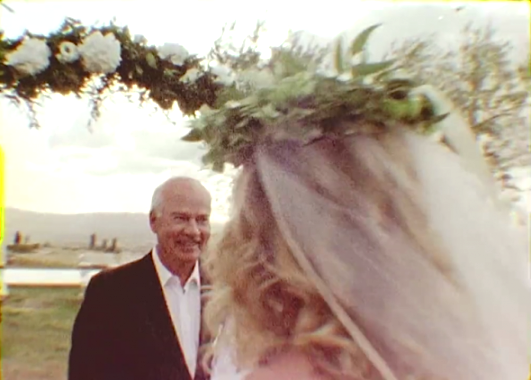 “This place is sick. They’re all married to one another. They’re shacked up with one another. Their wives are on the payroll of the CBC. It’s just awful, the goddamned incest here.” – Rt. Hon. Byron Muldoon*

Far be it for Frank to nitpick our brothers in armpits at Canadaland, but their latest Peter Mansbingo conspiracy theory is a crock.

In case you missed it, Jesse Brown, Canada’s self-appointed and self-inflating Media Ethics GuruTM, this week revealed shocking news that CBC’s chief slaphead has friends in high places! Who knew?

“Peter Mansbridge Officiated the Wedding of Justin Trudeau‘s Director of Communications,” Canadaland announced Nov. 11—much to the delight of the Twitter torch and pitchfork mob.

Brown linked to egotastic video from the wedding of Kate Purchase (Trudeau’s DComm) to Perry Tsergas in Italy. Sure enough, nestled between the tasteful cleavage shots of the bride and cameos by proud pundit step-papa Bruce Anderson and funny uncle Rick, there’s the CBC’s chief correspondent assisting with their vows.

From the video “evidence,” Brown made a bee-line to the conclusion that Mansbridge’s recent access to Trudeau for a 20-minute rub’n’tug on The National was due to his close personal relationship with Purchase.

With all due respect to Canadian journalism’s Chief Hall Monitor, his headline is chronologically fucked up. Purchase was not Trudeau’s DComm when she got married in 2012. Justin won the Liberal leadership in 2013.

The logic in Brown’s Corpse conspiracy, as best we can parse it: Mansbridge officiated at Purchase’s wedding three years ago because he knew Trudeau would be chosen party leader the following year, Purchase would become his director of communications, the Liberals would defeat President Steve’s Tories in a landslide and Purchase would then scheme with Peter to get an exclusive interview on CBC.

But no one is suggesting, nor should they, that Kate’s nuptials and guest list weren’t emblematic of a country run by a tiny elite of cronies, legovers and second cousins.

Not only has Kate’s stepfather Bruce properly recused himself from The National’s At Issue panel now that she’s toiling in the PMO, but her mother, Nancy Jamieson, was, back in the seventies, Saltpeter’s co-vivant.

* Definitely not over dinner at 24 Sussex with Peter Mansbridge and Wendy Mesley.