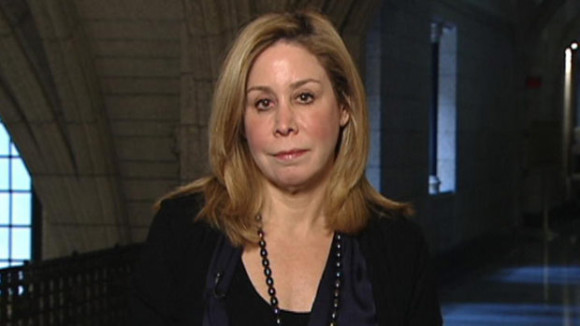 Last week, the indefatigable spawn of Babs was up to her old tricks, high-horsing on Twitter about the appointment of Laurie Graham, former Parliament Hill hack, as principal secretary for Nova Scotia Premier Stephen McNeil:

@LindaFrum April 3
Yet another objective CBC/CTV Ottawa reporter quits journalism to work for Liberals. This time in NS Premier Office.

Yoo, hoo, Linda! Were you sleeping through the last general election, when your beloved patron, President Steve, hired numerous Sun News braunshirts to try to stem the Liberal tide?

And don’t even get us started on the endless ranks of arslikhan Tory journos who went to the dark side of the trough during the Harperregnum, the Peter Kents, the Pam Wallins, the Mike Duffys, the er, Linda Frums.

Before Frum’s entirely non-partisan appointment to the Udder Place in 2009, she was not only one of Harper’s most unabashed media cheerleaders, but a major backer and baglady.

She and husband/developer Howie Sokolowski hosted private fundraisers for Harper, away from the prying eye of the media, and enriched by the bankroll and Rolodex of pater Murray Frum.

And as a journalist, Linda truly put the hag in hagiography. As neocon doughboy Ken Whyte‘s designated fluffer at the National Post and Maclone’s, Linda was renowned for the Frumjob™, her patented full-body interview, complete with happy ending.

One example of many: Frum’s vigorous shoeshine for Maclone’s of a newly-installed President Steve in March 2006. (Sample question: “As Prime Minister, you are public property. You are our top cultural icon. Are you comfortable with that?”

Despite this pitiless interrogation, the famously forgiving Harper still tipped Linda for the freebies-for-life Red Chamber at the tender age of 46, to much uncharitable and hurtful commentary about the back-scratching unseemliness of it all.

Poor Winda has always been thin-skinned about her Conservative connections. Years previous, when she was awarded a seat on the board of the Ontario Arts Council by Preem Duffer Harris, much crying of foul ensued from the NDP.

“But I am not and have never been a member of the Progressive Conservative party, or any other party,” Linda whinged to the Globe and Minion in 1996, noting that her many good works had always been purely ecumenical.

Who was retailing such patently false rumours? In at least one case, seems it was the young Frumlet herself, in an interview with Toronto Lite a decade earlier.

“Frum calls herself a political junkie. ‘It’s in my blood,’ she said. She worked at the Progressive Conservative headquarters in Ottawa during the 1984 federal election, and then served as chief of communications for youth delegates in Larry Grossman‘s first bid for leadership in 1985. She’s so devoted to the cause she even worked on Election Day at the York East by-election Tory riding headquarters, although she’d only just returned from India.”