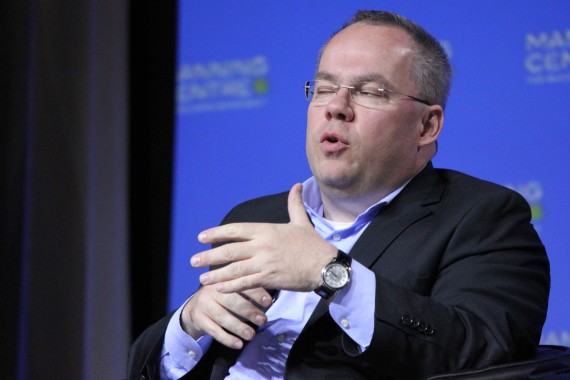 Paul Wells‘ sudden exit from Maclone’s is the source of high anxiety among his new colleagues at the Toronto Star parliamentary bureau.

It’s not been announced yet, but Wells will take over typing duties from the retiring national affairs columnist Tim Harper.

Star hacks are painfully familiar with “Thumbsie’s” massive ego. They’ve seen the self-impressed pranny on Twitter, where he often regales followers with retrospectives of his own greatest hits:

“I think the last sentence of this column from last fall is one of my favorites,” he wrote in reference to one of his own eyeglazers in Maclone’s.

In the late nineties at the National Post, the pumpkin-headed pundit was famous for standing up in his cubicle and reciting his latest column aloud, oblivious to coworkers cringing under their desks.

This isn’t the first time Wells has tried to land a gig with the Star. In fact, his last attempt gave rise to a golden rule of negotiation named in his honour: The Wells Dictum. For those unfamiliar, the Wells Dictum posits that the intellectual brilliance, real or imagined, of a national columnist, is in inverse proportion to the scribe’s negotiating smarts.

It all started when the Graspers, then-owners of the Putz, fired editor Ken Whyte. Wells jumped on the blower to Star boss John Honderich.

Naturally, Honderich was greatly enthused about acquiring a typist of Wells’ dexterity, and preliminary bargaining, in the $200K-a-year realm, commenced.

Alas, Wells committed the howling error that put his name to the Dictum, telling Honderich that he also had an offer from Maclone’s, and if the Star didn’t top that deal, he was off to the refried weakly.

Honderich immediately pulled the plug. Wells had committed the classic negotiating faux pas of not knowing what motivates the guy across the bargaining table. Honderich’s ambition in those days was to strip the Post of its assets and Wells was considered one of them. But once he knew Wells had another gig, it was no longer necessary to sign him to an exorbitant salary in order to hurt the Putz.

Wells, in playing the Star against Maclone’s, reduced his bargaining value to zero. That, plus the boner of suggesting to Honderich that his precious family jewel was on the same level as Maclone’s.

Now he’s finally got his Star gig, at a reported $225,000/year, which will further piss off the rest of the Star stable (is that you, Chantal?!)

10 comments on “Pranny Overboard! Paul Wells to the Toronto Star”