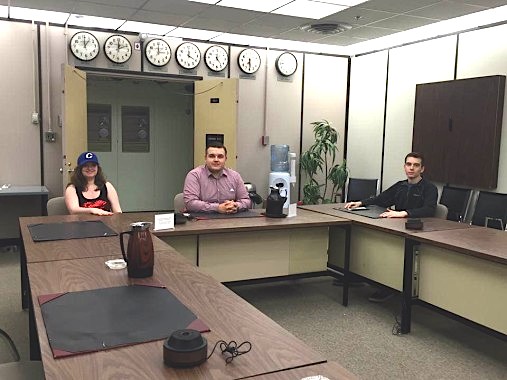 Let there be no doubt that the Tories emerge from their Vancouver be-in the very model of a modern Conservative Party: low taxes, low morals, heck, even a skirt for interim leader!Let Saskatchewan bible-basher Brad Trost fulminate about the “socialist” menace of same-sexy marriage all he wants, the party is striding confidently into the late 20th century.(The extremely straight member for Saskatoon-University, I note, married delightful spouse Gerelt, co-congregant at his fundie Elim Church, after a chaste Christian courtship of seven years or so. Last April, after a couple more years of closing their eyes and thinking of defunding Planned Parenthood, unto them a daughter was born.)

In the face of such Tory Enlightenment, we are deeply saddened to hear that the flower of the party’s yout’ has been targeted with specious accusations of tar-pittery.

Secretary-Treasurer of the OPCYA, faithful fartcatcher to prez Kinsey “Shurely” Schurm, and president of the McMaster Tiny Tories, Mikey made a hip millennial pitch for President Steve in university rag The Silhouette last fall:

“You may hear claims that Prime Minister Harper doesn’t care about the youth, but this couldn’t be further from the truth. Multiple initiatives taken on by our Prime Minister will directly impact our generation. On the horizon we can expect to benefit from increased contribution limits to TFSAs, an increased first-time RRSP withdrawal, and a sounder Old Age Security and Guaranteed Income Supplement that will be there when our time to exit the workforce comes.”

But he soldiers on with a fun summer job interning in Lisa Raitt‘s constituency office, even as persons unknown circulate, in a transparent attempt to discredit the young Leader of Tomorrow™, certain of his social media utterances. For instance, this jocular exchange from last Christmas, shared with fellow Little Schits™ Nona Lee Tiangson and Jack Greenberg: “btw Definition of choking on cock wishing a muslim who you dislike merry christmas” 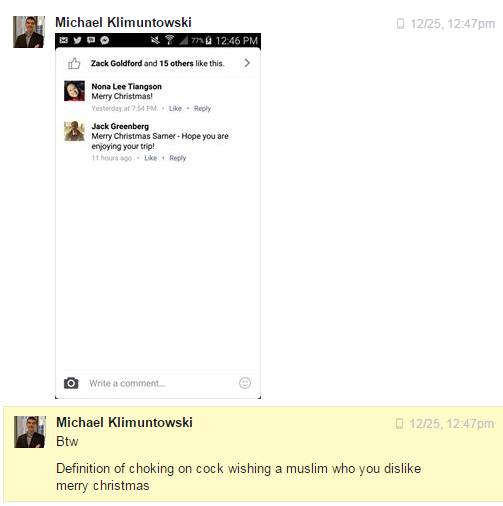 As invariably happens with such partisan mischief, Mikey’s holiday greeting has been removed from its original context, in which it was almost assuredly hilarious.