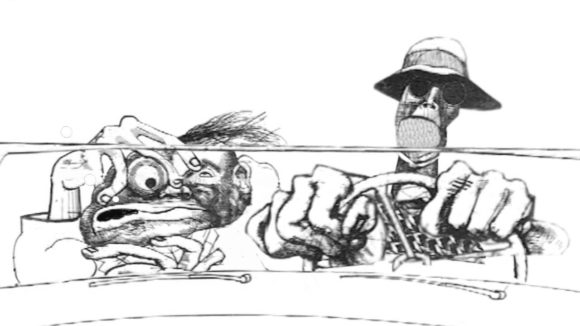 I hate to advocate drugs, alcohol, violence or insanity to anyone, but they’ve always worked for me.
– Hunter S. Thompson

Frank leaves it to the honourable court to untangle what truly transpired in a rented cottage on the shores of Finnegan Lake (“about 100 km north of Belleville,” the Toronto Star helpfully guesses), where Rosie DiManno is charged with assaulting Teresa Villeneuve, her brother Benny‘s ex.

Bancroft OPP say that on July 12, they “responded to an altercation on Finnegan Lake in Wollaston Township. Once there, officers learned that an altercation had taken place between two (2) of the persons present. These persons were visitors to the Township of Wollaston.

“As a result of the investigation, officers have charged Rosie DiManno, sixty (60) with one (1) count of assault.”

There are, of course, two (2) sides to every story, but Rosie’s prudently not talking, telling Canadaland only, “there are children involved and I won’t make the situation worse for them.”

Those would presumably be Teresa’s 18-year-old son and his underage sister, who reside with Benny and allegedly witnessed the family throwdown. According to Teresa, a heated discussion over a previous family set-to, and just what constitutes assault, preceded the, er, assault.

“Rosie attacked me, came flying at me, punching me in the chest and opened hand slapped me in the face,” she told Frank. “She looked at my daughter and said, ‘Now that is an assault.’”

Upon hearing of the charges and locale, conventional wisdom had it that family time at the cottage and a few too many pops in close confinement with people you’d rather never have seen again, had concluded in the time-honoured Canadian idiom. Who among us, your honour, fucking rellies, etc.

Refreshments, Villeneuve says, were indeed present: “She started drinking the moment she stepped into the cottage. She opened a beer and pulled her bottle of pills out, putting them on the dining room table.”

“I know she is taking Zopiclone and washing it down with hard liquor. Have you ever seen this girl drink? Wow.”

These scurrilous allegations, Frank’s legal department hastens to add, have not been tested in court, and it must be noted that Teresa’s an old antagonist, going back to her years-long custody battle with Benny, which Rosie bankrolled. (“Rosie spent over a half a million,” she complains. “Hit me with three and four motions a week. Buried me in paper.”)

Still, the contretemps could hardly have come at a worse time for the Star, still reeling as it is from the suicide of Reveena Aulakh and related shocking allegations that One Yonge has long been a cesspit of rampant jambaggery (Franks passim, ad schtuppiam).

With the paper’s union already on John Honderich’s ass about a ‘poisonous’ work culture, will the Great Atkinsonian™ take this opportunity to trot DiManno down to the HR abattoir?

Rosie, who’s been bringing her inimitable oeuvre to the Star for 40 years, would not go quietly – or cheaply – into that good night. She’s been offered, prior of these unfortunate alleged events, a $250K buyout, plus a parliamentary-quality $90,000 per annum pension (defined benefit, with all the trimmings).

The vacationing DiManno, who has not appeared in the Star since her last Wimbledon dispatch, July 11, has been ordered to have no contact with her alleged victim, though no such restrictions relate to the kids/witnesses.

Despite Auntie Rosie’s guidance and frequent financial assistance (vacations, iPhones, etc.) the young fella has, according to his mother, found himself in his own spot of legal bother. Rosie’s paying his legal fees, potentially putting him in an uncomfortable situation vis-a-vis her own charges.

And while Frank would never presume to pre-judge Rosie’s guilt or innocence, her bonkers and bellicose reputation precedes her. A few escapades from the highlight reel:

1997: Lynn Crosbie publishes her book, Paul’s Case, a fictionalized treatment of Paul Bernardo’s exploits, in which she suggests Rosie crony Crusty Blatchford was sexually attracted to the sex slayer.

That sends Rosie into a bug-eyed shitfit, in which she threatens to claw open Crosbie’s face. The book, writes DiManno, was “cheap sexploitation,” by a grave robber, “gnawing on the bones of murder victims and spitting at the survivors of this whole ordeal.”

Crosbie swears out a complaint against DiManno to get a restraining order from a justice of the peace.

2008: Toronto typist Doug Bell runs into DiManno in the lobby of One Yonge, and she greets him with two slaps across the face. Over the clanging in his ears, Bell thinks he hears DiManno excoriate him for his column criticizing her coverage of the Robert Baltovich debacle, in which the Scarborough man was wrongly convicted of murdering his girlfriend, Elizabeth Bain.

Apparently, Rosie objects to Bell’s suggestion that her defence of the aggrieved Bain clan was a bridge too far—in that it was papa Bain’s lies that put Baltovich in pokey in the first place.

Thing is, Bell didn’t write the offending article. That honour goes to Baltovich Boswell Derek
Finkle, who penned the piece as a guest blogger on Bell’s site.

2014: Montreal courtroom artist Delphine Bergeron writes a letter of complaint to Star editor Michael Cooke over Rosie’s unhinged behaviour at the Luka Magnotta trial upon finding out she might have to cover the grisly case from the overflow room:

“This morning, at the courthouse in Montreal, reporter Ms. Rosie DiManno made a scene inside the courtroom, despite clear and repeated directions by special constables and courthouse personnel about the areas available inside the room where the Magnotta trial is taking place.
“I can understand that Ms. (DiManno) was trying to best position herself, but to then insult law enforcement officials as well as myself, who asked her to please go to the overflow room and stop the spectacle (screaming, refusing to leave, lacking respect, and saying, “fuck!“)
“There is a limit, especially when the insults toward me continued in the hallway, where she called me a “cunt,” in front of witnesses. I do not think that this is the image you want to project of your media.
“Please take the necessary steps to ensure that a situation such as this does not happen again. You may consider this email a complaint arising directly from the inappropriate behavior of Ms. DiManno.
“It is a disgrace to the field of journalism that strives year around to maintain a good relationship with the people it informs.”

@RDiManno: @joe_warmington A disgrace to yourself, your paper, your profession. You write endlessly about ‘scum’. Take a look in the mirror”

@joe_warmington: @RdiManno I think you are talking about yourself #ripraveena. Do you even care about her?

@RDiManno: How fucking dare you? Come here and say that. I’ll rip your fucking throat out.

Rosie comes by her pugnacity honestly, as she herself revealed in a 2010 Mother’s Day column:

“While my dad scared the bejeezus out of me, I never feared my mom even though she was frequently the disciplinarian, a long wooden spoon at the ready to whack me across the head.

“She was so small that our German shepherd, Jack, would often topple her over by getting up on his hind legs, both collapsing in a tangle of limbs.

“The dog got the wooden spoon treatment too.”

They fuck you up, your mum and dad…

9 comments on “Rosie DiManno: Fear and Loathing on Finnegan Lake”