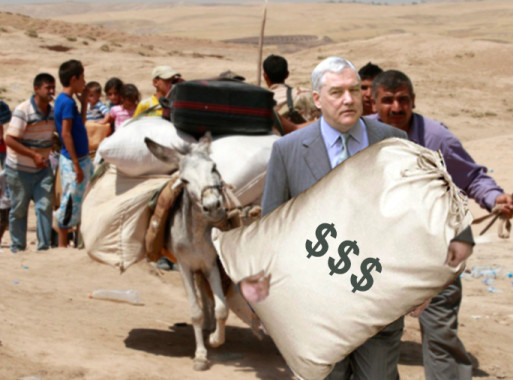 Black, the urbane sophisto, author of numerous doorstoppers and, until his Hollinger misadventures, an intellectual fixture in the best salons of London and New York.

In short, he is a gentleman and a scholar, accusations Trump will assuredly never face.

So why the hell would Black take up cause for Trump?

To hear Tubby tell it, he found great solace in Trump’s support through The Troubles, and remains grateful that Donald visited him during his captivity at the Federal Correctional Facilities in Coleman, Fla.

But knowing Tubby as we do, Frank suspects other motives.

Is it possible Black has his eye on a gig with the Trump administration? Perhaps not a job in Washington, but his knowledge of American politics and history would put him in line for an advisory role, or maybe even an appointment of some kind.

More important, Trump would also be useful to Tubby in securing that which he’s longed for, lo these many years: A Presidential Pardon.

With a stroke of the pen, President Don could wipe clean Tubby’s fraud conviction, that stain on his reputation that he whinges ceaselessly about; the “barbarity” of the American justice system and how it done him wrong.

Which brings us back to Tom Bower, longtime Black nemesis, who once said, “Convicted fraudsters obey a single rule for their future prosperity. They always protest their innocence and seek pity as the victims of vengeful prosecutors, governments or ‘dark forces.’ Black passionately wants to get back to business and restore his social status.”

To that end, Tubby has climbed aboard every media soapbox in the land, no matter how meagre the compensation.

His most recent appearance came earlier this week on CTV’s Power Play, where he again defended his curiously coiffed compadre.

“Trump has behaved in a very stylishly adequate and unexceptionable way and he’s gaining in the polls.

“He was one of the best business associates I ever had. I think he would be a capable manager as president.

“Trump has not run a racist campaign and when I referred to Archie Bunker [followers] it [was his] dislike of political correctness and affirmative action.

“Donald Trump has a perfect record as an equal opportunity employer” and on and interminably on.

For his deep thoughts, CTV pays Black $500 per pop, an amount well short of Tubby’s opening bid last spring, when he demanded the network cough up $1,000 (in line with the $800 the National Post pays for his Saturday morning delusions.)

But CTV demurred and eventually beat his Lordship down to half his expectations.

Still, it’s five times what they offered Jeffrey Simpson, who quit the show last year, rather than play for peanuts.

3 comments on “Tubby and Der Donald: Begging Your Pardon”