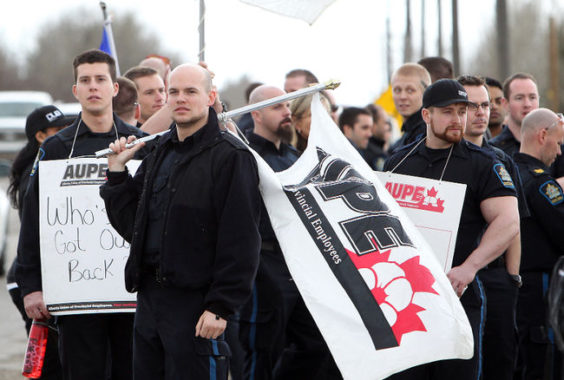 Frank is delighted to hear that Alberta’s largest union is in no rush to use its newly won right to strike and squeeze a big raise from the cash-embarassed Knee Dip government.

According to Guy Smith, obergruppenfuhrer of the Alberta Union of Provincial Employees (AUPE), next year’s contract proposals by 75,000 of its members will be tempered by the grim realities of the provincial economy.

There will be no “storming of the barricades,” Smith told the AUPE annual general meeting in Edmonton this week. The union will use its new right to strike “prudently.”

Alas, prudence is not a word often associated with the AUPE—and certainly not in the matter of executive salaries (about which there has been zero mention at this week’s AGM.)

Indeed, Smith and his lieutenants have been quietly awarding themselves rich increases, even as tens of thousands of proles in the private sector have lost their jobs and the province faces a $10.9 billion deficit at the end of the fiscal year.

According to AUPE documents googled by Frank (www.aupe.org/documents/45FKJ/) Smith’s salary is now $191,220.02 and will be “adjusted thereafter as per the wage settlement, excluding special grade adjustments of the Government Services.”

Jason Heistad, AUPE executive secretary treasurer, gets $152,975.74 and the Vice-Presidents, of which there are now six—up from four a couple of years ago—haul in $114,732.01 per year.
(VPs: Mike Dempsey, Erez Raz, Carrie-Lynn Rusznak, Glen Scott, Susan Slade and Karen Weiers.)

Why the AUPE execs, who trousered their raises last April, have been so quiet about their good fortune in lean times is a mystery, but their secret is safe with Frank.

4 comments on “Alberta Report: PS union exec at the trough”