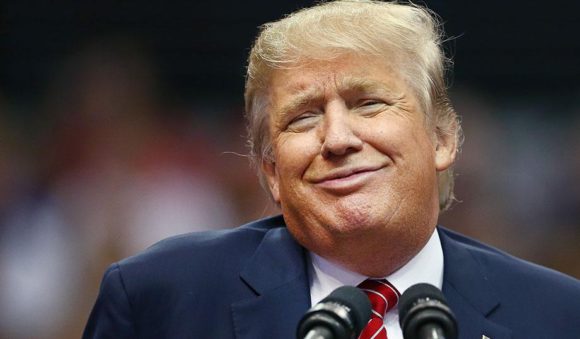 Not to mention unsane
He needs to stop being distracted by side issues. …Mr. Trump has rather sullenly receded into his worrisome and self-demeaning habit of focusing on absurd side issues in a coarse way. [T]he middle of a presidential election campaign against the country’s first major-party female nominee is not the time to call a former beauty queen Miss Piggy. This isn’t a matter of misogyny at all, as the Democrats and their darkened sky of screaming parrots in the media claim; it’s just ungracious.
—Conrad, Lord Tubby, National Review, Oct. 4, 2016.

And merely a coincidence he happened to be black (and a secret Muslim)
Even after she rallied after the first quarter of the debate, Mrs. Clinton displayed the substantive vacuity of her campaign on the fatuous birther issue: It was never a racial question at all, only a matter of Obama’s constitutional eligibility for election.
—Conrad, Lord Tubby, op. cit.

D’ohnald Trump
[E]scalating as an issue a completely irrelevant snide reflection on a woman’s appearance, in a presidential campaign, is unacceptable behavior for the seeker of so great an office… He should have said, when Mrs. Clinton threw “Miss Piggy” at him, that “that was a regrettable choice of words about someone who had violated her undertakings on entering the Miss Universe contest.” He could have neutralized, or even won on, both issues but failed to see them as the baited traps they obviously were….
—Conrad, Lord Tubby, op. cit.

Keeping one’s presidential pardon options open
Trump is still ahead or about even in enough states to win.
It must also be said that for the first time in the campaign, Mrs. Clinton made an intelligent policy point in calling for a drastic reform of the criminal-justice system…. It is a shameful mockery of the Bill of Rights, and it is to Hillary Clinton’s credit that she has extracted…the one meritorious element of the late Sanders campaign….
—Conrad, Lord Tubby, op. cit.

The message being that he’s a scowling oaf with an extremely small hands
If Donald doesn’t exploit the opportunity he has created…he will have only himself to blame. He must stop scowling, stop personalizing everything and being goaded like an oaf, and stay on message….
—Conrad, Lord Tubby, op. cit.