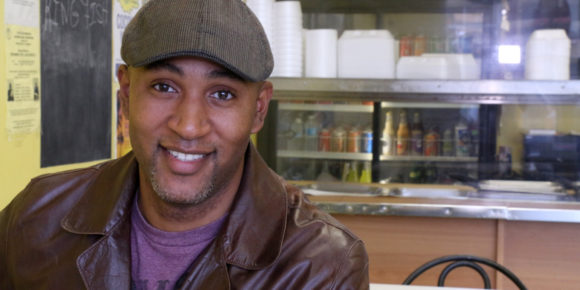 Alas, the difficulty with being a self-appointed guardian of press ethics is that sooner or later, all that self-righteous sanctimony comes back to chomp you on the ass.

Take, for instance, the recent adventures of Andray Domise, another self-celebrating prat, social activist and erstwhile Brown collaborator. In addition to his Canadaland podcasting, Domise has also been a contributor to Maclone’s, The Globe and Minion and TVO, and ran against Rob Ford in the 2014 Toronto municipal election.

Andray’s self-promotion drive swerved into the ditch last week over charges of assaulting his girlfriend, Chantal Denne, three times between March and September 2015. Domise was also charged with mischief for alleged damage to Denne’s cellphone.

None of the allegations, bien sûr, has been proven in court, and his legalist, Mitchell Worsoff, told the gutter press that his client denies the allegations and the alligator. Andray’s an “outstanding individual and he’s an intelligent and responsible member of our community. Similarly to many others who find themselves accused of this type of offence, (he is) the subject of falsities and exaggerations.”

And our Andray, it must be said, knows a thing or two about falsity and exaggeration!

Domise was born “Andre” but switched to the more Caribana-inflected “Andray” when he realized that “Andre” comes with all sorts of inferences, none of them flattering.

As the candidate o’ colour in Ward 2, Domise played up his hardship fable about being raised in poverty, the ol’ tar paper shack, back in the holler, doo-dah. His bio included: “…born in Toronto to an immigrant Jamaican family…raised by single mother in a social housing complex in Rexdale.”

An aspirational tale, sure, but a little economical with the actualité. In fact, his single mother remarried and the family moved to West Palm Beach, where his sisters were born. Eventually, they settled in Toronto, but by then Andray was in his teens and soon enrolled in the University of Windsor.

But je digresse. The assault charges leave Brown in an awkward situation, since he knew about the allegations against Domise for over half a year, but sat on the story.

This from a media critic who harangues the MSM about every lapse in disclosure and transparency.

Readers will recall Brown’s outrage over Jian Ghomeshi’s infamous 2014 Facebook post, in which the Persian perv wrote about a condition of his [proposed] settlement with the CBC:

“I was given the choice to walk away quietly and to publicly suggest that this was my decision.”

Incensed, Brown accused the CBC of trying to “deceive the public and cover up crimes [even after Ghomeshi] showed [CBC executives] photo evidence that he had brutalized a woman.”

Whoops! Now the worm has u-turned and it can be revealed that assault charges were laid against Domise nine months ago. At the time, he was co-hosting a Canadaland podcast with fellow Blacktivist Desmond Cole. But in February, he advised Brown he had some, er, personal issues to attend to, and they agreed to a parting of the ways (shurely ‘walk away quietly and suggest it was his decision’?!—ed.)

Canadaland wasn’t the only media outlet to freezer-bag the story. The Toronto Star and Maclone’s knew for months, but kept it under wraps.

Eventually, the National Post got wind of the juicy tale and published last Monday, forcing the Star to rush out its version.

Naturally, the charges have thrown Toronto progressives arse-first onto a painful wedge.

Domestic abuse cases invariably set their man buns on fire, with much promotion of victim’s assistance 1-800 numbers and emission of #webelievesurvivors into the trendosphere.

But Andray’s no dude-bro date-rapist, he’s one of their gang: Poster boy for the activist-o-colour crowd, which leaves feminist nutters like HuffPost columnist Rachel Decoste in a true quandary and she ends up coming down on the side of the alleged beater, rather than the beatee:

@The BlackHoof Nov. 18
If we can’t hold our allies to the same standards we hold our enemies to, what fucking good are we?

While most of her feminist compadres were strangely silent, Kelli Maria Korducki took a courageous (and dextrous) stand on both sides of the fence: “It’s also worth remembering that both parties here have claimed abuse. Do we believe one survivor, both or neither?”
‬
Meanwhile, over at Canadaland, Brown has gone dead-air on Domise, opting instead for policy snoozers (ad-free CBC) and breaking news (those crazy kids from Degrassi High.)**

That didn’t go down well with some Canadaland supporters:
‏
@dylanxpowell Nov 22
Makes ya kinda sick thinking about how Domise and friends just carried on since February like this was never going to come. Makes ya even more sick that a media source built around a) public right to know about predators b) belief in victims, sat on this story.

**Jesse replies: Heya. Just fyi re “Brown-out” and “dead-air”: we’ve had a reporter on Andray but got scooped. I RT’d the NP and Star coverage, as did CANADALAND, and I talk about the case on today’s podcast.