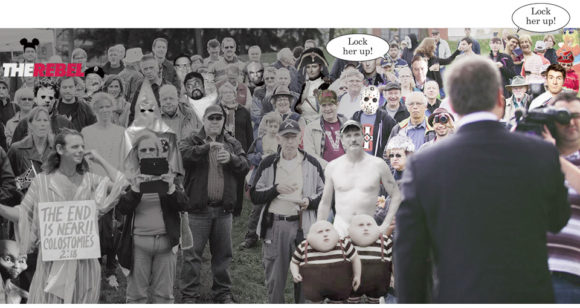 Transcript of an interview by CFRA-radio host Evan Solomon with Rebel Media Commander Ezra Levant, whose anti-carbon-tax rally at the Alberta legislature last weekend prompted just the sort of media uproar Ez’ was praying for.

In the event, Conservative Party leadership candidate Chris Alexander was captured on video simpering along as protestors chanted “Lock her up!” in reference to Alberta preem Rachel Notley.

Even Alexander’s old crony, Maclone’s typist Scott Gilmore (aka Mr. Catherine McKenna) had a Twitterfit: “I worked w/ Chris in Kabul. He was brave principled, a brilliant diplomat. Now? Snitch lines, Ezra, ‘Lock Her Up.’ Lay down with pigs, Chris, you’re going to get muddy.”

Levant: It was an amazing outpouring of real grass roots Albertans [about the pain they’re going through]. They don’t want to pay carbon taxes, they’re hurting enough already. We had a no profanity rule, we said OK, let’s keep it family friendly. So there was one fun moment where people sort of [mirthless chuckle] copied that Donald Trump chant they had about Hillary Clinton “locking her up.”

Solomon: The idea that we should lock up political opponents who have done nothing has made news. How do you justify that kind of level of—

L: –very easily, it’s the same kind of thing the media got wrong with Donald Trump. The media were taking him excessively literally, but not seriously and it’s the same thing here. You’ve got two, three thousand people, many of them out of work, suffering, unemployment nine per cent and Rachel Notley’s going to bring in the largest tax increase in Alberta history—without a mandate by the way. She didn’t campaign on this, she has no social licence. So you have real people, really hurting–

S: –she won an election, she didn’t campaign specifically on [the carbon tax] I agree but—

E: No I’m just saying she has no consent of the governed. I’m not saying it’s illegal. It’s deeply immoral and she didn’t have the courage to face these men in hard hats. It used to be the NDP was the party of the guys in hard hats. They’re not. They’re the party of the fancy, jet-setting environmentalist activists, so Rachel Notley … you know some of these guys blow off some steam by making a joke. They’re not actually going to lock up the premier, they’re not stupid. I know the media thinks blue-collar folks are stupid. They’re just having some fun. But the language police, it’s Canadian media in general, which is holding the people to account on behalf of the government. The support for the carbon tax in Alberta is what, maybe 25%?

S: Let’s not conflate these two things and I appreciate we do that. I think it’s very fair to pay attention and we ought to [gibberish] the legitimate frustrations of nine per cent unemployment and whether or not carbon tax is a good or bad thing.

E: You know, the househusband of the federal environment minister, Catherine McKenna, her househusband, Scott Gilmore, did a tweet yesterday calling it a rally of “pigs.” P-I-G-S! 3,000 hurting people and the husband of the Trudeau federal environment minister called them PIGS! (yelling).
You doubt that they talk that way at home. You doubt that Catherine McKenna and her bigoted husband call Albertans pigs all the time and he just forgot that he was tweeting in public and so he said the way they talk at home… he called Albertans PIGS! She has not disavowed this.

S: Hang on, hang on, as you know, [Gilmore] is a conservative, he’s written very critical things—

E: –he’s a conservative is he?

S: I asked him, who are you calling a pig, Scott Gilmore. He was just on the program before you Ezra, here’s what he said:

S: Do you as a Western Canadian, you’re not just taking on Chris Alexander, you’re taking on who when you say, “If you lie with pigs you get dirty.”

Gilmore: I’m taking on Ezra Levant and the rest of these, you know, leech-like vampires who are trying to take advantage of the genuine pain, the genuine disillusionment with government to line their own pockets, to raise their own profile. I was disappointed that Chris even showed up at that rally.

S: What do you say to that?

E: I think he’s a total crackpot. We’ve known that for a while. But now he’s calling us leeches. The irony is that it’s his wife who is forcing the carbon tax on the country. So I’m not sure how it’s me, having a rally—in fact we spent thousands of dollars on a PA system and other costs—how is that being a leech?
For him to dehumanize opponents, to dehumanize the people who are hurting. He not only called the 3,000 people there ‘pigs’, he called anyone who would dare listen to them ‘leeches.’

S: You call people names all the time!

S: What does that mean: “househusband?”