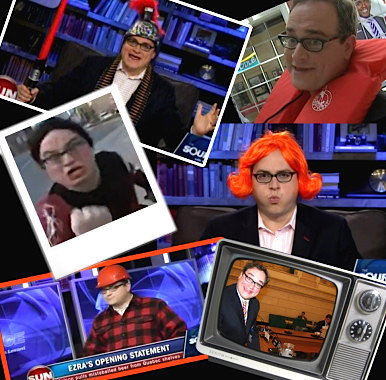 It ain’t easy being Ezra Levant. Not only must the Rebel Commander oversee a vast media empire from his podium at Rebel HQ on Vaughn Rd. aka Amazon Indoor Playground (ask for Omar), but he also must somehow keep straight the thousands of prevarications, nose stretchers, distortions and whoppers that pass through his cake hole every week.

Sadly, even an accomplished fake newser like Ezra can’t keep track of all those lies, and this week the little pisher got caught with his Lügenpants down over the story of the alleged brutalization of one of his Pulitizer winning journos, Sheila Gunn Reid.

In the event, the fragrant Ms. Gunn Reid was covering the women’s march in Edmonton (trying to bait some feminist cuck into making an ass of himself, shurely?!—ed.)

To Gunn Reid’s great relief, along came one Dion Biews, a nose-ringed demonstrator straight out of central casting. When SGR asked him to comment about counter-protesters at the rally, he demurred. She persisted, they argued and then SGR’s camera was struck—allegedly by Biews, who was subsequently charged by Edmonton flatfeet with assault and uttering threats.

An apoplectic Commander Ez’ took to the twittersphere to threaten a massive civil lawsuit against Biews, the “NDP thug,” and lash out at anyone who disagreed, like Alberta PR thingies Stephen Carter and Ruth Kelly:

“@carter_AB You truly don’t care about violence about women, other than as a political weapon.”

“@RuthatVenture Ruth Kelly is a sexist pig who is fine with violence against women, if they’re conservative. She blames victims. #bigot”

Speaking of violence, just the week before, Ez’ had been tweeting his support of Gavin McInnes on the occasion of the Rebel loudmouth punching out an anti-Trump demonstrator:

“@ezralevant That’s our boy! @Gavin_McInnes has been an anti-fascist for 30 years — he knows thugs in masks are un-American.”

Of course, inciting violence has long been a staple of the Rebel gang, as demonstrated by this undeleted comment about Rachel Notley from one of Ezra’s longtime subscribers, Vlad Johnson: 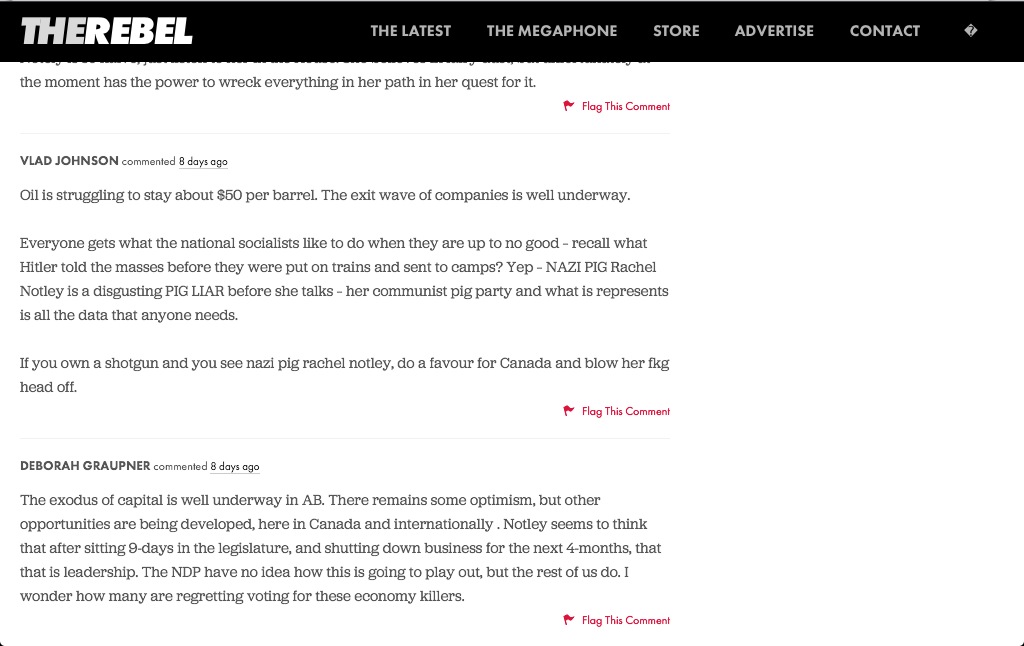 As for Sheila Gunn Reid, she bills herself as a journalist—she’s a press credentialed hack in the Alberta press gallery–but can’t help flying her true colours. Like Ezra, she seems to have a thing for the Trudeaus: 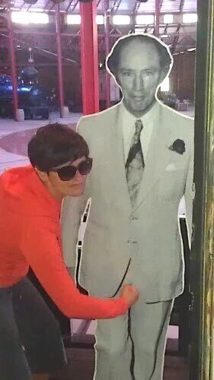 But when it comes to cash, Ezra has no trouble keeping things straight. He’s all for making as much loot as possible. (Somebody’s gotta cover private school tuition fees for his daughters and keep the Hummer gassed up, after all!)

So if that means pimping “Beautiful Arab Women” on the Rebel site, so be it.

Membership has its privileges. 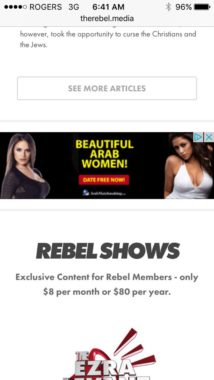