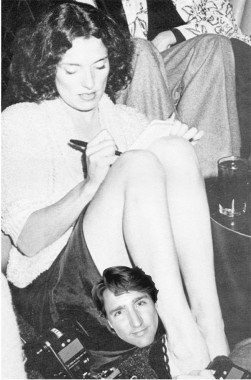 Heartwarming to see, after all these years, The New York Post can still get a few column-inches up for Maggie Trudeau.

Alas, Page Six’s latest tribute to the prime ministerial materfamilias glosses over her last couple of decades of advocacy on mental health issues, in favour of yet one more wallow in her chatelaines-gone-wild days of yore at Studio 54, and that time she ran out of clean gitch:

“An infamous photo of former Canadian First Lady [sic] Margaret Trudeau sans underwear is on the auction block,” we are informed, as Palm Beach Modern Auctions next month hawks a pile of snaps taken at the infamous nightclub by the late paparazzo Richard Manning. Frank‘s Florida correspondent has already reserved a paddle.

“But Manning’s most controversial shot was of Margaret Trudeau — then-estranged from her husband, Canadian Prime Minister Pierre Trudeau — sitting on the floor at Studio 54 with her knees and her long skirt hiked up enough to show that she was going commando.”

Stop the presses, indeed. Margaret’s ancient wardrobe malfunction may date back to the Carter administration, but it has remained an enduring subject for pop gynecologists through the decades.

Anthony Haden-Guest, in his 1997 boogie memoir, The Last Party: Studio 54, Disco and the Culture of the Night, writes that Manning snapped the shot when he noticed Maggie reeling from the effects of Quaaludes:

“’She came in with Halston and Liza Manelli’s husband,’” Manning recalled. “’She was ‘luded out. She slid off the couch and her dress fell back.’”

The photo (tastefully cropped) was later splashed all over Canadian papers with such headlines as “The Beaver Will Never Die,” but no one dared suggest that the prime minister’s wife had a head full of illegal chemicals at the time.

According to Haden-Guest, Trudeau and Sullivan were a brief, tragic item during Studio’s apex in the late seventies. Oscar night in 1979 saw Maggie ride Sullivan’s arm into the club’s inner sanctum, where Warhol, Capote and other beautiful cats partied down as guests of Studio’s owner, Steve Rubell. Haden-Guest recalls Rubell dancing with Trudeau that night, “her eyes wide and heavy-lidded, like those of a succubus.”

Apparently, despite its powdery glamour, this is a period Maggie would sooner forget. When Haden-Guest called to interview her for the book, she blew him off, saying only, “It was a long time ago.”