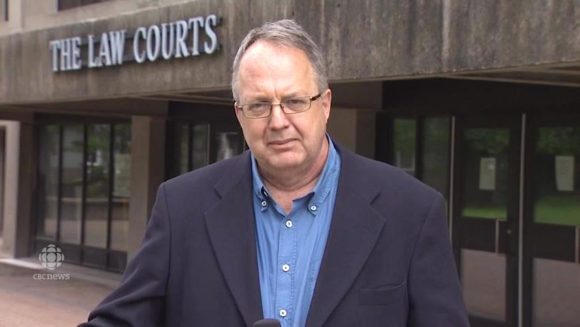 So farewell then, Steve Puddicombe.

The high profile CBC news hack saw it all in his 30-year career: Shit blowin’ up in Iraq and Afghanistan, earthquakes in Haiti, a tsunami in Indonesia. He also represented the CBC in Jordan and Belize and was the point man on the Swissair disaster.

Like many foreign corros (Postmedia’s Fat Matt Fisher comes to mind), Puddie had his own particular, er, idiom. A newsroom charmer one day, he could be loud and unfiltered the next.

“Steve had a very different sense of humour,” a former colleague recently told our chicken-fucking cousins at Halifax Frank.

Indeed, one female CBC reporter doesn’t know to this day that when she left her desk to go to the washroom, Puddicombe, while other staffers looked on, would sidle over, crouch down and give her chair a sniff.

He also had a rep for sharp elbows in the workplace, getting into it a couple of years ago with Corpse colleague Diane Paquette over access to the editing suite. As the argy-bargy escalated, Paquette’s boyfriend, fellow Corpse sluggo Jerry West, was obliged to intervene. Mercifully, cooler heads prevailed.

Management, however, was willing to forgive eccentricities from a top-notch hack who served the Corpse with distinction from countless beleaguered shitholes around the world.

But he was suddenly given the bum’s rush last month, not only from CBC, but also University of King’s College in Halifax, where he’d been an adjunct professor of journalism for six years.

When first asked why he’d severed ties with CBC, Puddicombe told Halifax Frank that he’d suffered “from severe depression due to my work in war and disaster zones…taken an enormous toll.”

He later added in a second email that he left CBC with full pension and anything even remotely sexual tied to his departure was “absurd” and “nonsense.”

As for King’s, he left after six years because he’d “had enough.”

Turns out there had been allegations of plagiarism against our Steve. The Corpse conducted an internal review and discovered even more examples of pilfering other reporters’ work.

“In light of what was uncovered, we took the appropriate action and I can confirm that Stephen is no longer with the CBC. – Chuck.”

Asked about the plagiarism charges, Puddicombe acknowledged in a subsequent email that when he was in Washington in December reporting on the run-up to the inauguration, I got “caught up in the rush to file” and “two lines were not paraphrased properly.”

He added that he had not been “fired or dismissed.”

As for Thompson’s accusation of other examples of plagiarism, well, er, Puddicombe admitted that in July, in a report about VP-Elect Mike Pence, a sentence from another source “accidentally wasn’t paraphrased.”

Seems like harsh justice for a loyal CBC trouper, but then, this is the age of deep distrust of the media and nowhere more than CBC. In the post-Ghomeshi/Lang era, CBC brass is anxious to cover their asses and even the most casual/accidental of misdeeds must be punished.

One comment on “CBC Fires star Reporter for Plagiarism”