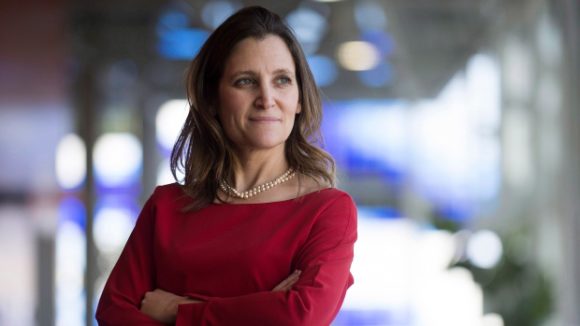 Another day, another backrub for Foreign Minister Chrystia “Britney” Freeland, courtesy of her former underlings at the Globe and Minion. The dreary daily’s Lawrence Martin did the honours in a Feb. 22 fluffer on the munchkin minister’s ongoing travel ban from Russia:

“The Russians are spooked because the feisty and super-bright former journalist is of Ukrainian descent. They suspect she’ll take a harder line than Mr. Dion…The continuing banishment of our Foreign Minister from Russia is but a small symbol of how bizarre geopolitics has become. It’s not something that bothers Ms. Freeland. Nor should it be. Given the ways of the Russian thug, it’s more like a badge of honour.”

Quite so! And anyone who’s heard Britney unpack her Inspiring Personal Narrative™ knows that contending with the perfidious Rooskies is something of a family tradition.

“Through her mother’s parents, Michael Chomiak and Alexandra Loban Chomiak, Freeland is rooted in the immigrant experience,” the Toronto Star’s Linda Diebel wrote in a 2015 profile.

“The Chomiaks saw themselves as political refugees from Soviet-occupied Ukraine, and loved Canada.

“‘All my grandparents loved Canada but my Ukrainian grandfather was the most passionate,’ says Freeland, who was born Christina Alexandra and adopted the name’s Ukrainian form. ‘I remember his kids once saying something mildly critical of Canada. He pounded his fist on the table and said he’d lived in six countries and Canada was the best in the world.’

“Michael Chomiak was a lawyer and journalist before the Second World War, but ‘they knew the Soviets would invade western Ukraine (and) fled…and, like a lot of Ukrainians, ended up after the war in a displaced persons camp in Germany where my mother was born.'”

While Freeland’s Ukrainian rhapsody goes down easy in Canada, some journos across the pond are poking at the ellipses in her heartwarming tale.

(The Aussie merde-disturber, who’s been covering Russia since ’89, knows Britney from her days as the Financial Times‘ Moscow bureau chief and freelanced Russian news for the Globe when she was deputy editor there. The New Jersey Star-Ledger‘s Dave D’Alessandro once described him as “the kind of journalist who turns up dead once a month or so inside Putin’s Russia.”)

“Records now being opened by the Polish government in Warsaw reveal that Freeland’s maternal grandfather Michael (Mikhailo) Chomiak was a Nazi collaborator from the beginning to the end of the war,” Helmer informs. “He was given a powerful post, money, home and car by the German Army in Cracow, then the capital of the German administration of the Galician region. His principal job was editor in chief and publisher of a newspaper the Nazis created. His printing plant and other assets had been stolen from a Jewish newspaper publisher, who was then sent to die in the Belzec concentration camp. During the German Army’s winning phase of the war, Chomiak celebrated in print the Wehrmacht’s ‘success’ at killing thousands of US Army troops. As the German Army was forced into retreat by the Soviet counter-offensive, Chomiak was taken by the Germans to Vienna, where he continued to publish his Nazi propaganda, at the same time informing for the Germans on other Ukrainians.”

Alberta government records indeed identify Chomiak as the editor of Krakivsti Visti (Crackow Herald) during the Nazi occupation. But they don’t explain, as does the Los Angeles Museum of the Holocaust, that it was a collaborationist rag supervised by German censors:

“German administration limited the scope of both publications, Lvivski Visti and Krakivski Visti, to pure Ukrainian internal affairs and to the demonstration of Ukrainian support of the Nazis’ ‘New Order.’ It was typical, within these publications, to not to give any accounts of the German genocidal policy, and largely, the editions resorted to silencing the mass killing of Jews in Galicia. Ukrainian newspapers presented the Jewish Question in light of the official Nazi propaganda, corollary to the Jewish world conspiracy.”

Helmer stitches the rest together:

“Chomiak was editor in chief of the newspaper after a Jewish editor was removed. The newspaper itself was set up in January 1940, publishing three times weekly in Cracow, until October 8, 1944. It was then published in Vienna from October 16, 1944, until March 29, 1945. The precision of the dates is important. They coincide with the movement of the German Army into Cracow, and then out of the city and into Vienna. The newspaper itself was established by the German Army; and supervised by German intelligence. Chomiak was employed by an officer named Emil Gassner. His title in German indicates he was the German administrator in charge of press in the region. When Gassner moved from Cracow to Vienna, he took Chomiak with him.

“Chomiak’s publication was an official one of the German administration in Galicia, known at the time as the General Gouvernement. The printing press, offices and other assets which provided Chomiak with his work, salary, and benefits had been confiscated by the Germans from a Jewish publisher, Moshe Kanfer…Kanfer was forced to flee Cracow for Lviv. From there he was taken by the Germans to the Belzec concentration, where he was murdered some time in 1942. From Chomiak’s office to Belzec the distance was 300 kilometres.”

And the postwar refugee camp yarn? Helmer’s not buying that one, either: “Just before Vienna fell to the Soviet forces in March 1945, Chomiak evacuated with the German Army into Germany, ending up near Munich at Bad Worishofen. On September 2, 1946, when Freeland says her mother was born in a refugee camp, she was actually in a well-known spa resort for wealthy Bavarians. The US Army then controlled that part of Germany; they operated an Army hospital at Bad Worishofen and accommodated Chomiak at a spa hotel.”