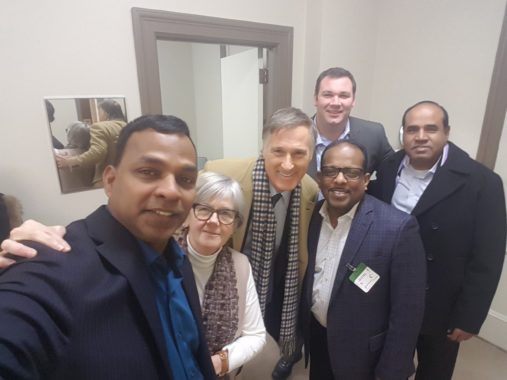 What would the Tory leadership race be without overheated (and colour-coded) allegations of voter fraud?

Maxime Bernier‘s campaign has snapped up several of the top Tamil-wranglers who were so instrumental in Patrick Brown’s PC leadership victory, including Babu Nagalignham and Sri Vallipuranathar (ex-MP Parm Gill‘s brother Manjeet is Max’s national outreach director and prime brannouser in the Sikh community). These recruits have predictably sent competing GTA organizers into fits of brown-alert paranoia over ethnic vote conspiracies in the party of Sir John A.

To hear the also-rans whine, Team Bernier operatives are engineering mass signups of new members, their names cut-and-pasted from the Ontario PC membership lists (which include some 14,500 Tamils) without the formality of actually contacting them. Their membership fees are then processed through large quantities of prepaid gas station credit cards (a different one for each family) and judicious IP spoofing.

Next month, Bernier field coordinators, shitloads of Indos who know the unwitting new signups from temple, social and sports clubs, will blitz their houses to pick up voter cards and scan IDs for Mad Max’s bulk-bought march to victory in May.

Still, Bernier’s detractors are doubling down, compiling lists of unsuspecting GTA Indos allegedly signed up through the scheme. Among them:

Bhupinder Sidhu
13 Donwoods Crt (Ran in a Punjab local election in India. Still, to the best of anyone’s knowledge, resident there).

One comment on “CPC Leadership Sleaze: Mad Max’s Tory Tamils by the tonne?”