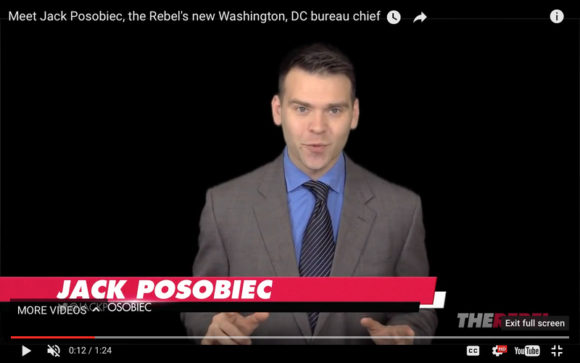 – Waved a “Rape Melania” sign for TV cameras at an anti-Trump protest last fall in order to discredit the opposition to Der Donald.

-Promoted with Mike Flynn Jr. allegations that Hillary Clinton aide Huma Abedin had a connection to the Muslim Brotherhood and that Marco Rubio was a closeted homosexualist with a bad blow habit.

-Played a key role in promoting the Pizzagate story that alleged a Washington DC pizza shop was a front for a child sex ring led by Clinton.

Inspired by far-right Infowars wacko Alex Jones, who claimed that Hillary had “personally murdered and chopped up and raped” children, Posobiec and a friend went to Comet Ping Pong for a closer look. According to a Washington Post account, they ordered garlic knots and beer and Posobiec began shooting the event live on his Periscope app.

When he took his camera into a back room where a child’s birthday party was underway, the restaurant manager enlisted the help of two D. C. cops who were across the street to show Posobiec the door.

That night, a few hours after Posobiec posted his video, the hashtag #pizzagate peaked.

Fake news at its finest. Welcome to the team, Jack, and kudos to Ezra and the klan for recruiting the second-most-dedicated sleuth to ever look into the fictional pedo-pizza cabal.

Number One (with several bullets), Edgar Maddison Welch, is sadly unable to entertain any offers of employment at this time. The 28-year-old North Carolina man pled guilty Mar. 24 to assault with a dangerous weapon and interstate transportation of a firearm. These federal and local charges stemmed from his own Dec. 4 investigation of Comet Ping Pong, during which he discharged several rounds from his AR-15, alas freeing no children from Democrat sex slavery, but at least ventilating no bystanders. He’ll be sentenced June 22.

2 comments on “Ezra Derangement Syndrome #154: Our Man-child in Washington”