The Corpse: One Ladurantaye A-Leaping! 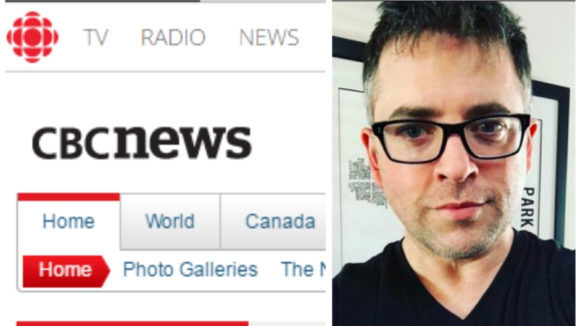 So farewell then, Steve Ladurantaye!

The Corpse Whiz Kid, tapped to rearrange the deck chairs on CBC-TV’s The National, has waddled the plank in the wake ((that’s enough nautical drivel!—ed.)) of the “Appropriation Prize” fiasco.

Rewind a couple of weeks ago when Hal Niedzviecki, editor of Write Magazine (Writers Union of Canada), urged pasty CanLit types to “explore the lives of people who aren’t like you.”

Much Twitter mobbing ensued, as Niedzviecki was roundly assailed for advocating cultural appropriation, particularly since his mag showcased Indigenous writers in the same issue.

Niedzviecki fled in a hail of bullets, prompting the renowned multiculturalist Ken Whyte to jump on Twitter and solicit donors for his own $1,500 “Appropriation Prize.”

The tin-eared tweets sparked a massive blowback, followed by the Giants of Journalism™ in full retreat, amid a torrent of apologies, mea culpas and groveling prostrations.

CBC management nixed Ladurantaye’s first apology, deeming it insufficiently repentant, and ordered him to offer up a more self-abasing snivel:

Ladurantaye’s blunder had many CBC hacks skeptical about just how serious management was re its much-touted diversity program.

The Corpse has poured hundreds of thousands of dollars and untold hours into promoting diversity hires, then along came Ladurantaye with his careless but revealing pledge. Many around CBC were convinced that the only way management could prove its sincerity was to send him for the high jump.

Of course, his dismissal looks particularly bad on Jennifer McGuire, the CBC news supremette who lured him over from Twitter Canada to take command of CBC Digital last year.

Ladurantaye’s first order of business was to create the CBC Opinion site, which he touted as a platform of diversity, fresh voices, blah de blah.

To this end, he hired his chum Robyn Urback as 2IC, then gave one of the initial Opinion columns to none other than Warren Kinsella, the longtime self-promoter and veteran Liberal shill, who just happens to be an old pal of Ladurantaye’s. They play in the same faux punk band, Shitpants From Hell.

Meanwhile, McGuire was busy planning the new flagship news show that will replace The National, which is bound for the boneyard after Peter Mansbingo’s interminable farewell tour wraps up July 1.

The task of rearranging the deck chairs on The National went to Ladurantaye, even though McGuire previously announced the job would be boarded.

She soon abandoned that charade and just handed him the key National gig.

But after the appropriation prize debacle, McGuire was left with only two options:
1. Try to weather the storm, or;
2. Pack Ladurantaye onto the tumbrels–a far, far better thing to do than admit she erred in selecting such a glib, in-over-his-head newbie, without a clue about leadership.

It really wasn’t much of a choice. After all, self-preservation is Job One at CBC, so when it came to the crunch, McGuire pushed Ladurantaye over the side.

Poor Steve should have recalled Twitter’s 2013 publication: “26 Rules For Journalists,” in particular, Rule Number One: “You are one tweet away from being fired!”

3 comments on “The Corpse: One Ladurantaye A-Leaping!”