Trebles all ‘round at CBC-TV, where the Steve Ladurantaye Social Rehabilitation Program proceeds apace!

Steve, readers will recall, was the CBC wunderkind in charge of reinventing The National in the post-Peter Mansbingo era.

But then along came Ken Whyte’s cultural appropriation prize campaign and Ladurantaye, eager to be one of the kool kids in Kanadian media, fired off a tweet in support of Whyte’s ill-considered crowd funder. Cue the shitstorm.

Ladurantaye was immediately frogmarched before the Corpse Star Chamber of Inappropriateness and Insensitivity and ordered to confess his sins and listen to impact statements from his victims of diversity (diverse victims, shurely?!—ed.)

At sentencing, CBC news supremo Jennifer McGuire decreed that as part of his reprogramming process, Steve would be exiled to the CBC’s “Content Experience area to help evolve our storytelling strategies and take the time necessary to reach out to Indigenous communities.” 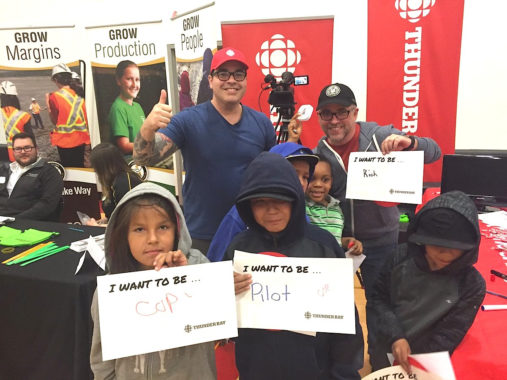 The first step in his recovery kicked off last week when CBC sent Steve to Northern Ontario to get a “better understanding [of] the appropriation issue from the perspective of Canada’s Indigenous peoples.”

According to the Corpse press release, Steve was well-received by students at the new school in Pikangikum First Nation “as they visited with prospective employers, including CBC News, at a career fair.”

The healing has truly begun.

7 comments on “The Corpse: Re-educating Steve”