A jaunty tug of the Frank forelock to our new Governor-Generalissima, space cowgirl Julie Payette.

And what a catch! As exclusively and breathlessly reported in all newspapers, in addition to her two missions as Canadian ambassador to the Final Frontier, the sexilingual triathlete holds two engineering degrees, sang with the Montreal Orchestra Chamber Choir and is an accomplished pianist (shurely shome mishtake?!–ed.) and on and interminably on.

While astronauts as a breed are known for obsessive-compulsive work habits, Payette got extra geek cred among her flyboy colleagues by breaking up the monotony of 14-hour days in astronaut training by studying for a PhD in robotics on the side.

The 53-year-old space cadet is also possessed of formidable people skills, unlike the rebarbative Roberta Bondar, whose publicity and fundraising value as the first Canadian astronette were always handicapped by a pronounced lack of charm and impatience for earthling bullshit, which caused many to mistake her for a miserable, humourless buzzkill.

Perhaps at odds with Excellency Julie’s very public new role as right honourable party planner, however, is a pronounced guardedness when it comes to her personal life.

Maclone’s typist Paul Wells tripped over the patented Payette cone of silence July 14 with a quick profile of the presumptive vice-regal consort, Lockheed Martin jet-jock and F-35 pitchman, Billie Flynn. A titch awkward, this, given the government’s ongoing jet-shopping vacillations.

Whoops! Turns out Julie and Hubby No. 2 have been discreetly split for some years now, and Thumbsie’s ‘scoop’ was duly deleted.

Deja vu all over again for the refried weakly. Back in ’99, before her first spaceflight, she put off another prying Maclone’s hack looking for some background info with a coy, “I’m a person sans histoire.”

Parents Andre Payette and Jacqueline Carre, brother Simon and sister Maude, extended family and neighbours were all asked as a matter of general policy not to talk to reporters.

The secretive spacegal even refused to confirm or deny media reports she was married. (She was, to engineer Francois Brissette, as non-plussed Canadian Space Agency spokesthingies would later confirm).

A couple of quiet divorces is certainly no scandal compared to the marital dramas that have befallen other prominent extra-planetary Canadians, such as Transport Minister Marc Garneau or zero-G stickman Bjarni Tryggvason.

Garneau’s acrimonious divorce turned tragic when both his ex-wife and the man she’d left him for committed suicide.

Tryggvason, readers of a certain age may recall, trained with Payette and flew his first mission in ’97, slipping the surly bonds of earth — and a knock-down, drag-out custody battle with his second wife, Lilly Zmijak. Still legendary among CSA sluggos are scenes of Bjarni taxiing for takeoff in his Cessna with a process server in hot pursuit, wildly waving papers as she raced across the tarmac.

So why is Julie so tight-lipped? A simple Garboesque appetite for privacy, or, as some have speculated in the silence, something to hide?

Like any other prominent Quebecker, Payette has of course been subject to the obligatory speculation over her political loyalties. Was she a closet separatist? Shades of Celine Dion, Julie has managed to avoid going on record as either supporting or opposing the People’s Republic of Quebec.

Parsing Payette’s c.v. certainly provides little of comfort for the keen-eyed Quebec nationalist. As a teen, the fiercely independent Payette quit Regina Assumptua, the ultra-traditional Catholic school, after tiring of taking her kneeling orders from nuns. She finished high school in Wales at the elite United World International College, a cosmopolitan setting not known as a hotbed of ethnic nationalism. (Of course, Black Jacques Parizeau‘s degree from the London School of Economics did nothing to dim his provincial passions.)

When Payette returned to Quebec to take her bachelor’s degree in engineering, it was at McGill University, the maudit anglais stronghold, before she struck out for Ontario and a job at IBM.

There she met Charles Fricke, whom she dated for two years and remained friends with. He attended her inaugural 1999 blastoff with his mother at Julie’s invitation. He was also one of a small circle of friends gathered at Payette’s home in 1992 as she awaited the news of her acceptance into the space program.

Despite their close relationship, Charles told Frank back in ’99, even he was hard-pressed to pin Her Excellency down as either a federalist or a splitter. While many of her friends and family wore their allegiance to Quebec on their sleeves, Payette always seemed to be above the fray, if not exactly wrapping herself in the Canadian flag, certainly refraining from setting it alight.

“I think she was more or less an island in a fairly nationalistic circle of friends,” Fricke told Frank. 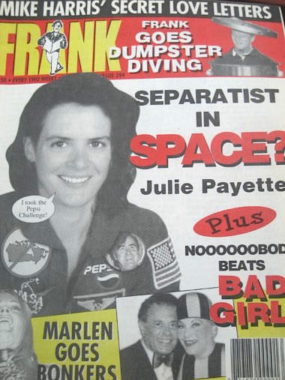 While some friends swore they recalled Julie declaring that no children of hers would ever be schooled in English, Fricke said those remarks were more likely from one of her more militant pure laine relatives, with whom he recalled heated discussions whenever the subject of politics came up.

Ain’t nobody’s business if she do or she don’t, but the proles will talk, and Frank sincerely hopes there won’t be a repeat of the ugly innuendo GGILF Michaelle Jean and chatelaine Jean-Daniel Lafond endured over her French citizenship and all the fun couple’s fascinating FLQ-sympathizing friends.

God save the Queen. We mean it, man. (Vive la Rideau Hall Libre!)

Believe it or don’t!

“A lesbian vampire’s quest for love”