How the Canadian government pays Postmedia to publish fake news 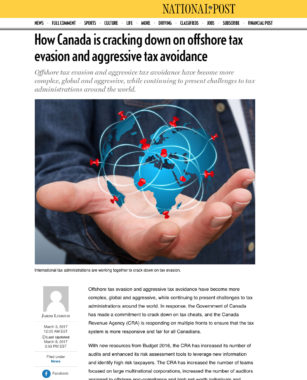 Extra! Extra! Read all about it! Paul Godfrey has a new scam to wring dough out of the federal government!

For the past couple of years, the Postmedia poobah has been after the feds for a subsidy that would bail out his newspaper chain, currently sinking under $261 million in long-term debt owed to U. S. hedge funds.

But there’s more than one way to squeeze Liberal lemons. It’s really very simple: The Canadian government pays Postmedia hundreds of thousands of dollars to print propaganda in its chain of pifflesheets.

A fluffer headlined, “How Canada is cracking down on offshore tax evasion and aggressive tax avoidance,” appeared in the National Post, March 3, 2017. Presumably, the timing of the “story” was no coincidence. CRA wanted to reassure taxpayers, in the midst of preparing their personal returns, that CRA was in hot pursuit of tax evaders living it large in sunny climes. Sample copy: “The CRA has a proven track record…efforts will continue to ensure that all Canadians pay their fair share, without having to shoulder the burden left by those who seek to pay less than they owe…CRA is on track to uncovering an additional $2.6 billion in revenue for the Crown over the next five years.”

The story, filed in the Post’s “news” section, was “developed” by Toronto ad agency Cossette, in a media partnership that “enables the CRA to inform and educate Canadians.” CRA Postmedia

CRA claims the article was written by a Postmedia reporter, but the byline went to Jared Lindzon, a Toronto-based speed typist hired by Content Works, Postmedia’s fluffer division, in concert with the Cossette spin doctors.

CRA paid Postmedia $223,863 for the deal, which included four different articles, each pretending to be a real news story. They were published nationally, on separate weeks, over a four-week span—prime placement in print and digital.

The revenooers also paid La Presse+ $64,634 to run French translations of the articles and ads.