How long can Ezra Levant keep on kampfing on?

The Rebel Obergruppenführer gamely continues his grisly goosestep two-step of course, but for an ever-shrinking audience of online lip-movers.

As recently as May 2017, Alexa.com ranked the Rebel 1818th among Canadian websites in terms of traffic. These days, Ezra’s alt-right AV club is down to number 3,451 and sinking. 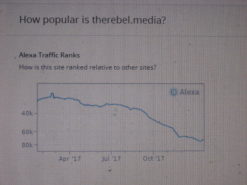 The beginnings of this vertiginous drop can be traced with remarkable precision to August’s neo-Nazi knees-up in Charlottesville, VA, during which one woman was killed and Rebel correspondent Faith Goldy went a Führer too far with her torchlit cheerleading for the white-makes-right demonstrators.

Ez’ reluctantly fired Goldy, but by then, many of his cast of cretins had already exited: Brian Lilley, Barbara Kay, John Robson, Gavin McAnus and Rebel board member Hamish Marshall, Andrew Scheer’s campaign manager, all disavowed the too-toxic Rebel.

That exodus triggered a subscription backlash as Rebel lost 5,607 YouTube subscribers and suffered a 43.6 percentage decline in YouTube views over the next 30 days.

How radioactive has the Rebel brand become? A Christmas crowdfunder for military families at CFB Borden raised $15,000 – but the base, after a quick Googling of its source, declined the cheque. (The Rebel is, sans doubt, in the process of returning the dosh to its original donors.)

Meanwhile, the little pisher’s ongoing legal woes continue to run up the bills. Lügenpants, readers will recall, ran out of road in his battle against legalist Khurrum Awan, who dinged him for $80,000 in defamation damages, plus $85,000 in costs at trial and appeal. Ezra’s subsequent petition to the Supreme Court went predictably nowhere.

Canadians for Justice and Peace in the Middle East filed another $120,000 libel claim against Rebel and Ezra last January.

And Levant’s Twitter-based slapfight with Robert “Canadian Cynic” Day, over the Rebel’s 2016 Fort Mac fire fundraiser (Franks passim), is headed for twin motion appeals in Divisional Court and the Ontario Court of Appeal.

The contretemps is estimated to have already run the combatants over $100,000 each. When the legalists squared off in court last spring, Ezra’s, Irvin Schein, was heard to incredulously ask Jeff Saikaley (Day’s), “How can your client afford this?”

Something’s got to give, and last week, something did, as Ezra’s recently-completed monster home in Forest Hill North popped up on MLS, list price: $4.2 million. 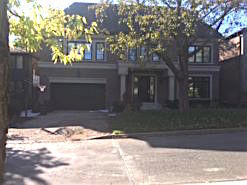 Within days of its debut, however, the listing disappeared, indicating either a quick sale or cold feet. Frank fervently hopes for the former, as the ostentatious money pit can’t be doing much for our protagonist’s liquidity.

Ezra and wife Irina snapped up the property for a mere $1.6 mil in 2014, while Ez’ was still drawing a regular Sun TV paycheque. (In a prudent bit of judgment-proofing, they put in in Irina’s name.) The purchase, the bulldozing of the existing shack and the construction of a new monster home were financed with a $2.5 million mortgage from Scotiabank.

In October 2016, they took out a second $1.2 million mortgage with the delightfully-named Gonad Holdings Inc, which has been squeezing Ezra for interest-only payments at eight per cent per annum, or $8,000 a month, ever since. Going, going, Gonad!