The president is entitled to be free from half-wit cable news announcers…regularly announcing that “the noose is tightening around [his] neck.” 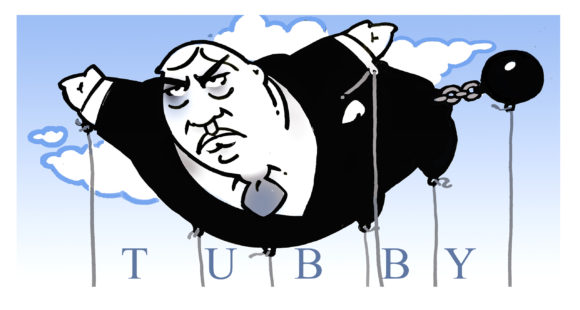 Bingo! Nailed it!
With Donald Trump, the British and most Western Europeans have the coruscation of their dreams that the United States is a vulgar, completely materialistic, cultureless Darwinian contest of the most tasteless and unsavory elements, elevating people in their public life who excel at the country’s least attractive national characteristics.
—Conrad, Lord Tubby, National Review, Jan. 31, 2018.

Lost and wandering in the dark echo chamber of his own mind
[M]y dear friend David Frum, an intelligent and courageous man who is not rational on this one subject, explained on Fox, in reference to his new anti-Trump book, that it was really Obama’s economic recovery (it isn’t), that the December economic figures showed the boom was slowing (it isn’t)….
—Ibid.

The long road back from the Great Recession began in mid-2009 and July marks the 84th month of recovery….
—Jeffrey Bartash, marketwatch.com, July 19, 2016.

Donald Trump’s critics never imagined that more than one year into his presidency, his approval rating would be rising and just under 50 percent…
—Conrad, Lord Tubby, National Review, Feb. 6, 2018.

…the economy would be cranking up to a 4 percent growth rate…
—Lord Tubby, op. cit

A fraudulent dossier commissioned and paid for by the Clinton campaign and the Democratic National Committee (DNC) was the basis of an application for a FISA warrant….
—Lord Tubby, op. cit.

The firm that employed Steele was initially contracted by a   conservative publication, the Washington Free Beacon, not    any Democrats or Democratic political campaign
—vox.com, Feb. 2, 2018.

OK, now it’s beginning to make sense…
The FBI is a sacred cow that has been above the law for many decades. It is complicit in the 99 percent success rate of American prosecutions, 97 percent without trial, and in the fact that the U.S….has five times as great a percentage of the world’s incarcerated people as it does of its population. The demented partisan ravings [blah, blah, blah]…
—Lord Tubby, op. cit.

Stop, you’re getting us all choked up!
The fact that Ghomeshi was acquitted in a meticulously conducted and argued trial, after being condemned in the media by everyone except Christie Blatchford, Barbara Amiel Black (my wife) and me, does not open in Horwath’s thoughts, such as they are, the possibility that he might not have been guilty.
—Conrad, Lord Tubby, National Post, Feb. 2, 2018.

Which pretty much eliminates every woman on the planet
I doubt that there are many male Canadians above the age of 40 who have never committed acts similar to those alleged against Patrick Brown, including Justin and me, though not involving women who were subordinate.
—Ibid.

Although she may want to re-think that slogan
Caroline Mulroney, in a slogan of Richard Nixon’s from 1968, “is the one;” she should be the next leader of the Ontario Progressive Conservatives and of the province….
—Ibid.

And, unlike me, still unindicted
Obviously, Ms. Mulroney-Lapham has learned the ropes politically from her father (disclosure: a dear and unwavering friend of 53 years).
—Ibid.

Black man victim in Black and White case
…Jonathan Black cuddles with his girlfriend of two years and opens up about the ordeal the couple have been through since the 40-year-old son of media baron Conrad Black was charged with domestic assault in 2016…. Black said White broke her wrist after an alcohol-fueled fight in the couple’s…apartment…. He said the couple was fighting because she thought he was cheating on her…. “She fell back and hit the television stand and got a tiny little fracture….” Black said he was charged with assaulting causing bodily harm. He was also charged with mischief under $5,000 in relation to [a] broken phone…. Black said he was subsequently re-arrested for breaching a [bail] condition…. They also laid an additional assault charge, which he said was later dropped…. Black said it was enough to keep him behind bars. He said he has a prior summary conviction for making harassing phone calls and ended up spending six-and-a-half months in the Toronto South Detention Centre until the case went to trial. “All I want people to know is that I won my case…,” Black said, adding he believes the crown attorney’s office was against him because he comes from a privileged background.
—Reported by “crime specialist” Catherine McDonald, globalnews.ca, Feb. 6, 2018.

5 comments on “The president is entitled to be free from half-wit cable news announcers…regularly announcing that “the noose is tightening around [his] neck.””