Senator Kenny Zips It Up: “I think I have done my bit”

So, farewell, then, Senator Colin Kenny.

Ten months before his mandatory retirement date, the erectile, dysfunctional Liberal senator suddenly pronounced himself all troughed out, ready to collect his $103,385 annual pension from a grateful nation.

“I have been experiencing continued ill health and feel the time has come to retire,” Col. Klink wrote in a missive to GG Julie Payette, Jan. 31. “I think I have done my bit…It has been my great privilege to serve my country over the last forty-four years, both in the office of Prime Minister Trudeau [the Elder] and as a member of the Senate.”

But the good senator has always been such an energetic and vital man that longtime admirers simply refused to believe he could be sidelined by mere illness.

Shurely, they insisted, it can’t be a coincidence that his decision came the day after former staffer Pascale Brisson contacted the PM to request her sex harassment complaint against him be reopened?

That he cleaned out his desk the same Friday PMO deputy operations director Claude-Eric Gagné fell on his porksword in a #MeToo sepuku?

What a spendy, skeezy trip it’s been since 1984, when PET dropped his charmless factotum in the Udder Place at 39. Klink took to the trough like few before him, consistently racking up some of the worst attendance records and the highest travel claims in the Red Chamber, no mean feat, since his commute to work consisted of a drive up Elgin Street.

For decades, Kenny’s staff moonlighted at his Supertan bronzing emporium at uncertain cost to taxpayers, whilethe boss treated himself to every perk taxpayers could provide, like a $100,000 office reno in 1999 or the $10,000 TelePrompter he charged to his office budget (he simply had to have the same model Bill Clinton used).

Still a classic in the annals of Senate boondoggles is the “fact-finding” toot Afghanistan Kenny finagled during his chairmanship of the national security and defence committee.

Despite being warned the committee couldn’t visit Kandahar, the main purpose of the exercise, Kenny pushed ahead with the rest of the trip to England, the Netherlands and Dubai—at a cost to taxpayers of some $150,000. The hotel bill in Dubai alone was $30,000 for six days.

Tory Senator Terry Stratton tabled a motion in November 2006, to hold hearings into the lavish bacchanal. Eventually, the internal economy committee ruled, in camera, natch, that the trip was not a misuse of funds. Among the committee members who voted thus? Senator Colin Kenny!

Other classics from the highlight reel:

1996: Stalked by a Senator! Longtime legover Pamela Henault, beneficiary of many a Senate contract and plus-one on countless junkets with the much-married senator, finally ends their tempestuous nine-year affair. It gets ugly.

Kenny, according to Heneault, begins a two-year harassment campaign. On one occasion, she comes home to find Kenny in her house. She calls the cops, but no charges are laid.

Kenny counters by painting Heneault as a bunny-boiler, claiming that she’s harassing him. Eventually, both parties sign a peace bond.

2002: Calling Doctor Love! Déjà vu when Kenny hooks up with the late Dr. Sheela Basrur, Ontario’s chief medical officer of health, renowned for her work during the Toronto SARS scare. The old smoothie sends her edible panties one Valentine’s Day.

Kenny and Basrur have staffers coordinate their schedules for assignations around the globe, including at Hedonism II, the swingers’ resort in Negril, Jamaica. 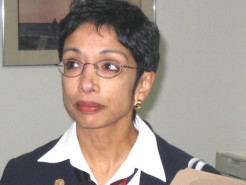 She sends a breakup email in October 2002. Kenny responds by bombarding her with veiled threats to send photos of their sporty sexcapades at Hedonism to her Toronto office: “I wish you would let me know, one way or another, who you would like me to send the pictures to and which poses you prefer for whom.”

2007: OK BY ME! Kenny’s longtime chief of staff, Donna Routliffe, lodges a formal complaint with the Senate.

“He’s out of control…a Jekyll and Hyde character,” she writes Senate lawyer Mark Audcent. “He screams and yells and swears at staff…and his extra-curricular activities are disgusting and deplorable.”

He also, Frank discovers, trolls Ashley Madison, the online dating service for adulterers, under the name OK BY ME.

Granted, there are some inconsistencies. Kenny’s doppelganger shaves 10 years off his age, claiming to be only 52. He also claims to be 5’8”. Nothing wrong with a virtual pair of elevator shoes, if they get the job done.

She then ups the ante by lodging a sexual harassment complaint, alleging sleazy comments, persistent invitations back to his condo for drinks, and repeated incursions into her personal space. 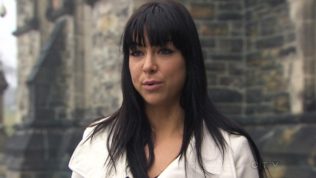 Though Brisson’s complaint is ultimately rejected, nine other survivors of Kenny’s senate office and Supertan come forward with their own stories.

Candace Amis, a 19-year-old former stripper when she worked at Supertan in 2003, claims she found herself faced with the supremely unappetizing choice of summary dismissal or a command performance on the skin flute.

So she did. Her subsequent complaint to Ottawa flatfeet came to naught.

Another Supertan alumna claims she arrived to open the salon and discovered the boss had declared it way-casual Friday: “He was naked from the waist down and I got the full frontal view of him. And when I came in, he didn’t apologize.”

2015: Audit This! After over 32 years of heroically helping himself to millions of taxpayer dollars, Kenny is finally clocked by Auditor General Michael Ferguson with his paw in the privy till. The damage? A piddling $35,349, subsequently discounted to $27,458.77 by special arbitrator Ian Binnie.

And they say there’s no justice.

4 comments on “Senator Kenny Zips It Up: “I think I have done my bit””