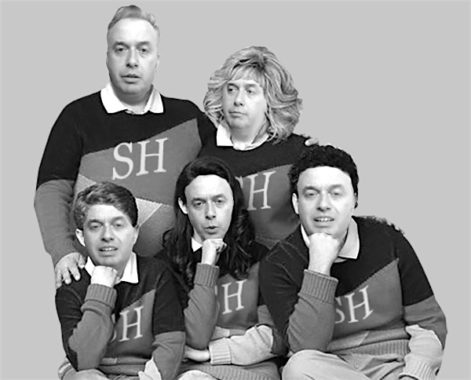 Oh, dear, another foot-in-mouth moment for conservative talk show doofus, Brian Lilley. The smart-haired hack, as readers will recall, has a history of grovelling apologies, going back to his days as a Tory propagandist with Sun-TV.

Who can forget the time he complained about CBC going “all native” with “ridiculous,” pronunciations of names of Quebec athletes like Hamelin, Bilodeau and Dufour-Lapointe.

According to Lilley, it was all the fault of CBC’s politically correct, latté-sipping hipsters. Better to mangle francophone names in the tradition of Foster Hewitt (“Here come the Habs, Ivan Cornwire passes to Henry Ritchard!”)

That was too much for Sun-TV’s Montreal masters, who promptly ordered the tin-eared booby to apologize: “I should have known better…I’m sorry…it will never happen again…I’m sorry…I apologize.”

The famvals anti-abortion Lilley replied:
“When @nikiashton announced she was pregnant she avoided the words baby or child. Congrats Niki but let’s admit you are having a baby.”

In the ensuing Twitter uproar, Lilley tweeted: “Glad to see all of the lefties telling me that ‘expecting’ means having a baby or child. Normally they [refer] to a ‘clump of cells.’”

Lilley’s Bell Media bosses ordered him to go on-air with an “unreserved apology” and acknowledgement that he’d “gone too far.”

In his latest social media mishap, Lilley last week claimed that an Ontario government bureaucrat was leaking insider info to commies at the Toronto Tsar.

According to Lilley, Queen’s Park journo Rob Benzie was getting tips about Doug Ford’s campaign from his wife, Rhonda McMichael, who Lilley claimed was a “top communications staffer for Kathleen Wynne.” Benzie replied that his wife was a public servant—not a Liberal staffer–hired when Mike Harris was in office and before Benzie worked at Queen’s Park.

“Surprised you don’t know the difference between bureaucrats and political staff. Please delete your defamatory tweets.”

Shurely, even a slow learner like Lilley would see the irony in calling out Benzie and the missus as partisan shills.

This is, after all, the same Brian Lilley who, after President Steve Harper announced a new childcare allowance, wheeled out his own wife and children to endorse the campaign pledge in a CTV national news clip.

He again used the Lilley brood as props to demonstrate his devotion to the Tories in the 2011 election. As Harper and a planeload of journos, including Lilley, returned to Ottawa for a weekend break from electioneering, there to greet them at the airport was Brian’s wife and kids, all decked out in matching Harper sweatshirts.