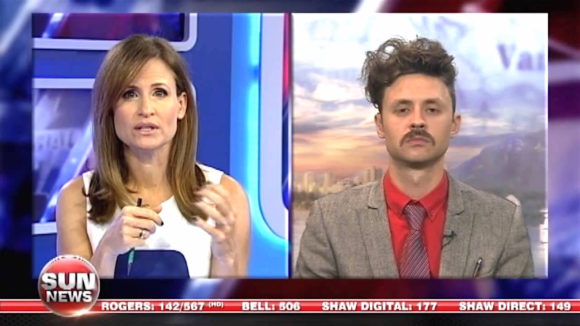 We note with amusement that J. J. McCullough has once again been billing himself as a cartoonist.

“J. J. McCullough is a political commentator and cartoonist from Vancouver,” he wrote last week in a Washington Post online opinion column about how Canada should “surrender to Trump over trade.”

Apparently the eraser headed nutter suffers from the same affliction as Conrad Black: He’s got a tin ear for his own persona (although in the case of J. J.’s cartoons, it’s more of a tin eye.)

But don’t take our word for it. Cast your gaze below on samples of J. J.’s oeuvre, and consider that this is the same guy who complained on Canadaland a couple of years ago that Terry (Aislin) Mosher was “the worst cartoonist in Canada.”

McCullough, whose credits include Reader’s Digest and The Rebel wrote: “The career of Terry Mosher is a wonderful case study of how far mediocracy [sic] can take you in Canada. Strip away all of Aislin [sic] awards, praise, and reputation, and you’re confronted with an inescapable reality:

“By any objective standard, [Mosher is] producing some real garbage…

“Most of the editorial cartoonists employed in Canada today are neither heroic nor clever. Increasingly, they’re barely even coherent. What they are is merely one more culpable party in the decline of traditional media, whose leading players have done their best to ensure their absence will not be noticed, let alone mourned.”

As for not finding success himself as an editorial cartoonist, McCullough blamed newspaper editors for hiring too many “single white guys,” (huh?), boomer readers for fearing change and editorial cartooning itself for being a dead art. “It’s not a remotely meritocratic enterprise,” he whinged.

The same weekend J. J.’s WaPo column appeared, Mosher was at IdeaCity in Toronto, speaking on the importance of visual satire and celebrating his 51st year as a political cartoonist. 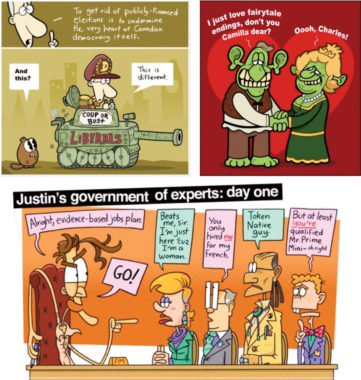 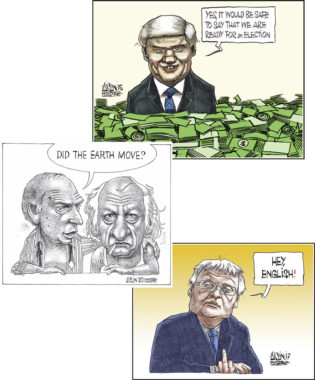 4 comments on “Frank Folio: The unrecognized genius of J.J. McBollocks”