From demanding police raids on pot shops to celebrate legalization day (“I expected to see people in handcuffs by now, but at the very least I expect to see them on CP24 by lunch!”) to expensively shitcanning  Alykhan Velshi from his OPG sinecure to the current  imbroglio over Dougie’s off-the-books OPP shaggin’ wagon, there’s been nary a cowflop at Queen’s Park that hasn’t borne Dean’s heelprint.

“When Ford was at city hall, he was known for coming into meetings bursting with new, sometimes bizarre, often underdeveloped ideas: Putting a Ferris wheel on the waterfront, bringing an NFL franchise to the city. Over time, Rob Ford’s advisors, Mark Towhey and Nick Kouvalis, realized that after hours, Doug was consulting with a bunch of unseen, unelected friends, who were helping him concoct these schemes. Towhey dubbed the group the Night Shift.”

“Dean has zero government experience,” one anonymous Tory complained to TL, “and now he’s in one of the most powerful positions in the government. He rules by fiat. He doesn’t know how to get things done, so he just bellows and screams at the end of the table. He has a simplistic, either- you’re-with-me-or-against-me attitude.”

Indeed, the raging bullyboy, whose headvalves burst at every former Liberal sluggo discovered on the government payroll, has so cowed his political and public service underlings that they gauge the threat level of any given meeting by the rate at which French can be seen clenching and unclenching his fists.

But it turns out the Deaner’s not all spit, bile and knuckles; he has a romantic side, too.

One persistent object of his affections has reportedly been none other than our Attorney General, the Hon. Caroline Mulroney, whom the silver fox has characterized to drinking buds as “a nice piece of ass.”

French’s charm-challenged courtship began, by some estimations, at March’s post-leadership “unity rally,” at which Mulroney and Christine Elliott were scheduled to kiss Doug’s ring and introduce him onstage. But when they showed up, they were informed they’d been bumped from the evening’s program. The Deaner himself instead warmed up the crowd for Dougo the Clown. 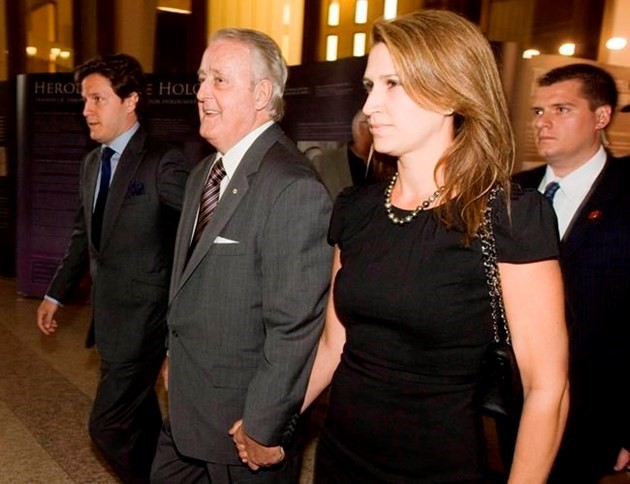 Since then, French has escalated his attentions to amorous catcalls and indecent proposals, often in front of witnesses, which more sensitive souls in our #MeToo moment might deem straight-up sexist bullying.

The much-married Caroline, mindful of staying on the right side of the preem, met these porcine impositions on her dignity and that of her office with a gormless “No thanks,” which only seemed to rev up the rebarbative French’s libido.

Shit like this is, of course, the last thing Ford Reich needs after the Jim Wilson and Andrew Kimber sex pig scandales, but so far media hacks chasing the story have met with a wall of Omerta from all concerned.

Mercifully, we hear Caroline’s torments finally ended last month with a phone call to DoFo, telling him to put a leash on his horndog, immediatement. Who was on the line? Herself? Please. Outraged hubby Andrew Lapham? Pfft.

No, the oleaginous and much-aggrieved baritone on the blower was none other than the Rt. Hon. Byron Muldoon, who made his displeasure abundantly clear to the premier, and tacitly threatening to share same with his vast network of Tory bagmen (shurely ‘take a gun and go down there and do some serious damage?!’–ed.) if the Deaner did not knock it the fuck off.

Which he has. For now.

At the Bore: Ari Goldkind

Hunker down and await The Coming Storm!