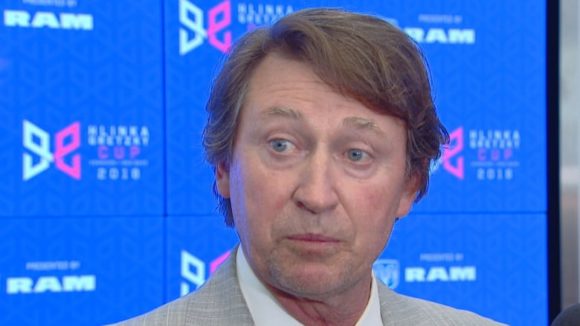 Dismal days hard by the Whitemud.

Despite having the best hockey player on the planet in Connor McDavid, the Edmonton Oilers are caught in yet another playoff death stall. They fired their head coach only a month ago; now the Oilers have kissed off general manager Peter Chiarelli because he couldn’t turn chickenshit into chicken salad.

Team president Bob Nicholson gassed Chiarelli between periods of Edmonton’s loss on Monday to the dreadful Detroit Red Wings (presumably so Chiarelli could get his car out of the garage and make his escape ahead of irate Oil fans). The man who drafted McDavid is the fourth GM over the side since 2008.

Whatever Chiarelli’s skills were in Boston (he won a Stanley Cup there in 2011), he contracted a bad case of Oilers Stupids almost as soon as soon as he agreed to head to Edmonton.

In only four years, he turned assets Taylor Hall and Jordan Eberle into a pocket full of mumbles, such are promises. He gave fossil Milan Lucic a huge pile of cash to look menacing in the mirror. He scored twice in 88 games.

Thus in the hole, Chiarelli kept digging. He committed US $4.5 million a year to goalie Miko Koskinen, after just 27 games. He geared his team for a grinding style when the league was headed in the opposite direction.

In short, Chiarelli was shit — just like every other GM who’s held the Edmonton job since Glen Sather scarpered to NYC in 2000.

A: Team owner Darrel Katz and his kitchen cabinet of players from the dynasty of 1981-90, who hover behind the back of every Oilers GM.

Reliable sources say Wayne Gretzky trousers an estimated $10 million a year to sign autographs at intermission. He’s joined by former Norris winner Paul Coffey (an estimated $1.5 million to bloviate on hockey matters), and former GM Kevin Lowe, who still haunts the joint since being moved aside in 2008. Other old boys flit through the building as well, still drawing breath and cashing cheques.

It’s hard to see why any competent GM would want the job. For now Wayne’s bro, Keith, has ridden the nepotism express to acting GM status. At worst, he can look forward to yet another possible No. 1 NHL draft pick overall— the Oilers’ fifth since 2010.

Knowing the City of Former Champions, it’s hard to say which is worse: Firing Chiarelli and still missing the playoffs for the twelfth time in thirteen seasons, or, Jesus take the wheel, watching their Calgary rivals take the best record in the NHL’s Western Conference into the All- Star break.

If the Stanley Cup somehow winds up at the Saddledome in June, it’ll be Kool-Aid all ’round on the North Saskatchewan.