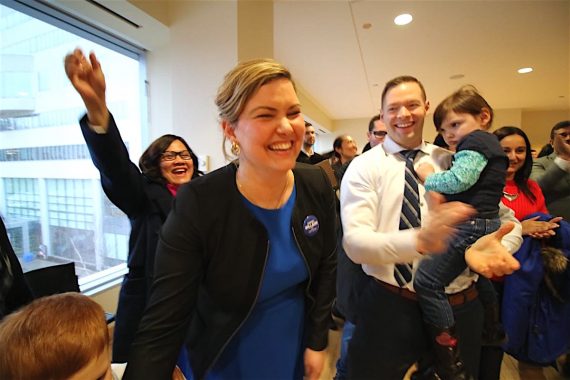 Andrew Scheer’s  Miracle on The Thirteenth Ballot leadership victory would not have come to pass without the divine organizational intervention of  the Campaign Life Coalition, Right Now, etc. So it should come as no revelation that the Tory election slate is rife with wild-eyed God-botherers.

Among them: Justina McCaffrey, the Opus Dei acolyte in the riding of Kanata-Carleton, who counts among her supporters alt.right wacko Faith Goldy. The gruesome duo has been friends for years and Justina designed the dress for Faith’s very, very white wedding in Prague in December.

But when it comes to evangelical zeal, McCaffrey’s got nothing on the Tory candidate in York Centre.

Step forward, Rachel Willson, a mother of two, homemaker and executive with Motivated Young People for a Strong Canada (MY4Canada), the 5,000-strong junior Jesus jamboree that rabidly supports the Tories’ theocratic agenda to infinity and beyond.

For years, Willson has been assistant director to MY4Canada fuhrette Faytene Grasseschi, and she’s been leading goggle-eyed young Christians on annual invasions of Parliament Hill to convince Tory MPs and senators that the voices of socially conservative yout’ must be heard.

On one occasion, the Kiddies for Kee-rist became so enamoured with Tory Little Shit™ Pierre Poilievre, that one of them later blogged: “We found out that Mr. Poilievre’s views support those of a moral Canada – He’s awesome!!!”

Willson and Grasseschi promote their cross-country Christian rallies as “sieges,” their followers as “hard cores” and “dread champions of the Lord.”

So what qualifies Rachel to be a candidate for parliament? Well, how about her great achievements for MY4Canada, including but not limited to the creation of a 24-7 virtual prayer chain “to pray for Godly government in this year’s election. Click here to sign up for your 15 minute weekly slot now.”

And then there was Rachel’s 2013 mission to save a Muslim from being a, er, Muslim. In the event, she flew to a rally in Accra to share the gospel with 110,000 Ghanaians.

But let’s let Rachel tell it, shall we?

“The most spectacular part of the night….I cannot even explain. Please, I urge you to watch the video ‘deaf Muslim ears opened in Jesus’ name.’ You will be blown away not only by the healing testimony but by the profession of Jesus as the Son of God by a Muslim. Praise The Lord! It was one of the most exciting moments not only of the crusade and trip, but also that I’ve ever been witness to in my life!”