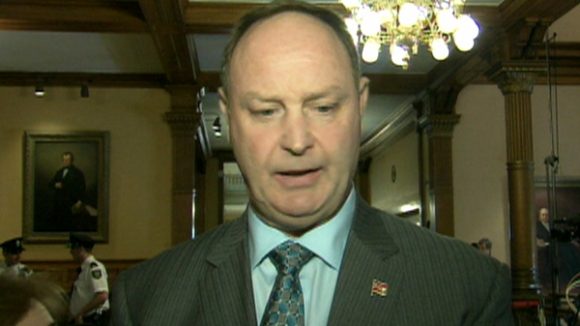 So, neither snakes nor ladders for John Yakabuski in last week’s cabinet bloodletting.

Unlike so many of his colleagues, the foot-faced minister of Natural Resources and Not Planting Trees rated a hold as the province’s park supervisor.

A “drive-by smear,” Yak insisted when iPolitics pointed out the potentially conflicting family ties. After all, you can’t choose your family–and even in the spectacularly consanguineous Ontario of Ford, Mulroney, Elliott-O’Booze, the French connection, et. al., the Madawaska Valley hamhock is a conspicuous inbred.

He’s six degrees of insemination from half of eastern Ontario, from sainted MPP pa Paul, to brother Konrad at the Globe and Minion, from Liberal cousin and Renfrew-Nipissing-Pembroke predecessor Sean Conway, to pianist brother Kim (concubine to the late Ian Scott), etc., etc.

Shuffle him yet again and there’s no telling what other grasping and forgotten rellies would come a-calling.

And speaking of drive-by smears, John’s had a few. As recently as 2014, when Liberal wood-burning tool Warren Kinsella was purportedly Fighting the Right instead of writing them $1,050 cheques, he took amiss the smears and calumnies directed at his upstanding, record-tidying friends Peter Faist and Laura Miller, blustering on his self-pleasuring blog:

“They want a war? It’s a war they’ll lose. They really, really don’t want me off the bench. I’ll fuck them up for free.

“How about this? Know about any other PC candidates, campaign managers, etc., with run-ins with the law – like our law-and-order pal Yakabuski, below – that you care to share? Convictions, citations, warnings, speeding tickets, whatever: send them to me here and we’ll have some fun.“

“How did Yakabuski get allowed into the Legislature without a criminal record check, for instance?”

So what radioactive research did the great and terrible Printh of Darkneth have to terrify the Tories? Er, yet another rehash of poor John’s lost fishing weekend, car crash and epic arrest in Wilno waaaay back in 1988, which resulted in convictions for obstruction and assaulting a peace officer.

John was then manager of the fambly biz, Yakabuski Home Hardware in Barry’s Bay, son of the riding’s just-retired MPP, Paul Yakabuski, and the incident inspired much gossip, but initially sparse news coverage. Ray Stamplekoski, two-fisted editor of the Eganville Leader, who had his own, er, issues, was reluctant to cover the story, lest he incur the terrible wrath of Yakabuski. (Yak had cemented a reputation as a hothead at 15, earning a lifetime ban from minor hockey with some stickwork on the noggin of another player.)

But the squalid truth would out, and the Ottawa Citizen, which in those days still covered the capital’s surrounding duckburgs, dispatched a reporter to cover the trial and reconstruct Yak’s adventures with fishing buddy David Afelskie, who had been at the wheel that fateful January evening:

“Court was told the two men were returning home from an ice fishing expedition at Lake Clear in Sebastopol Township when the vehicle went out of control at about 5:55 p.m. on Church Street in Wilno.

“The two men took a quantity of alcohol from the crashed vehicle and made their way to the home of Rose-Marie Kuiack, who lived across the street, [prosecutor John] Pepper said.

“After police arrived, Yakabuski and Afelskie went by ambulance to Barry’s Bay hospital. During the trip, Yakabuski became unruly and had to be restrained by ambulance staff.

“Yakabuski crawled under the ambulance to prevent the vehicle from proceeding to the hospital, and was eventually forced to the ground by police and ambulance staff, handcuffed and put in a police cruiser.

“Defence lawyer Tom Edmonstone suggested Yakabuski may have suffered a brain injury during the accident which could have influenced his behavior that night.“

Who could have predicted Yak not only overcoming this grievous disability, but joining the brain trust of the top-notch Ford Nation cabinet?